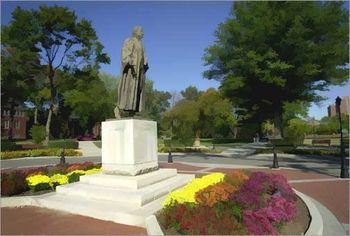 Dr. Saveliev is a professor of mathematics at Marshall University since 2002.

Prior to graduate school, he worked as an applied mathematician and software engineer at a large R&D institute in Moscow, Russia. At the time he developed numerical methods of image matching for missile navigation/guidance systems. He also worked at a start-up company on an automated fingerprint identification system.

Since his mathematics Ph.D. from the University of Illinois at Urbana-Champaign, he has conducted research in algebraic topology and several other fields. During this time a transition to applied mathematics ha taken place. The new areas of interest are

Courses taught and new courses developed during the review period

During my lectures, I write on the screen of a tablet PC with Windows Journal and a digital pen and the writing instantly appears on the screen for the students to see. I started doing this in 2009 and I really love the results: bright, colorful slides like in PowerPoint but with the spontaneity and flexibility of the chalkboard.

Unlike with the chalkboard,

Once the class is over, the whole lecture is immediately published in the pdf format on the class web page.

The content comes directly from my lectures. I transcribe the lectures into TeX, put them in articles on my site, and insert the illustrations as images.

The wiki format was chosen for its simplicity. There is no intent to make this site, which is an online textbook, match Wikipedia's goals of completeness, definitiveness, etc. On the other hand, "trivial" details, "elementary" examples, "easy" exercises, etc are never omitted. Indeed, the source of articles is always a complete set of lectures. In fact, not only the set is complete, each lecture is complete too -- everything that appears on the board is included in the articles.

This requires a multistage procedure:

I think this approach has significant advantages over the common practice of posting video lectures online: read-ability, search-ability, edit-ability, link-ability, the speed of download, etc. As a bonus, I can rearrange the content into any course I like.

The data nowadays comes in a digital format. This data is simply large tables of numbers. For example, it might come from either:

Sometimes there is a continuous function or process behind the numbers but often there isn't. The issues one has to deal with are the same though: max/min, increasing/decreasing behavior, rate of change, lengths, areas, volumes, etc.

What is commonly done is to go back to continuous functions via approximation, interpolation, curve fitting, etc. This approach introduces errors in your analysis and to handle those errors one needs to learn even more advanced math. Meanwhile, a typical graduate has never seen discrete functions and now he doesn't recognize that what he does with Excel every day has something to do with what he learned in his calculus class.

The bottom line is: the numerical aspect should be built in the math that we teach.

The answer to how this can be done is known: discrete differential forms and discrete exterior calculus. I have been trying to introduce discrete forms in a gentle manner in some of my courses, such as Differential Geometry (2010), Differential Equations (2011), as well as students' research.

During the review period I have transitioned from pure to applied mathematics.

Since my PhD and until about 2006 my main interest was in fixed point theory. This theory is a part of algebraic topology concerned with what amounts to the solvability problem for topological maps. Even though it has applications is differential equations, optimization, and game theory, this theory is firmly in the pure mathematics realm. After publishing a paper on applications of fixed point theory in control I became more and more interested in the areas of pure mathematics with more immediate consequences in sciences and engineering.

Algebraic topology has a long history in pure mathematics. However, its applied and computational aspects have been dormant until the 1990s. I attended the Computational topology short course in 2004. It was run by Herbert Edelsbrunner and John Harer in the Institute for Mathematics and Its Applications located on campus of the University of Minnesota. After the course I became convinced that algebraic topology would have serious industrial applications. It took me another year to find my personal interest - digital image analysis, and later also data analysis. The main tool used in computational topology is homology theory and its extension specifically designed for applications that face uncertainty and noise, persistent homology.

Applications of these ideas in digital image analysis has lead to the creation of my own image analysis algorithm and, eventually, to the development of Pixcavator, image analysis software. The purpose of this software is to help researchers and engineers without a significant computing background solve mathematical problems they encounter when dealing with the deluge of digital images from their microscopes and cameras. These problems are mainly concerned with counting: blood cells, seeds, fungi, fiberglass particles, even stars; and measuring: cancer tumor, blood vessel, vegetation coverage, or just fish.

There have been about 25,000 downloads every year. Pixcavator is not only "as simple as a calculator", it's also as universally applicable as a calculator. It is not designed for any particular field of science or a particular type of images. It's based on math and math only. That's what makes Pixcavator as broadly used as it is. Pixcavator has been used in both industrial and academic environment.

There are 30 research publications that credit Pixcavator that I am aware of. Some of the title of the journals are: Cancer Research, Journal of Chromatography, Research in Vision and Ophthalmology, Catalysis Letters, Colloids and Surfaces, The Plant Journal, Journal of Alloys and Compounds, The Minerals, Metals & Materials Society, Breast Cancer Research and Treatment, Pharmacy&Technology, Pflügers Archiv European Journal of Physiology, Geotechnical Engineering, Clinical Biochemistry and Nutrition, Diabetes, Applied Physics, Polymer Science, Advanced Biotechnology, Skin Research and Technology, Physics Procedia, American Society of Agricultural and Biological Engineers.

Another interest of mine is using discrete exterior calculus and discrete differential forms for modeling physical and other processes. The approach follows the intriguing idea that calculus is topology.

The research is presented in full in website Computer Vision and Math (inperc.com).

Service to University and Community

Service to the science community

Grants and grant proposals during the review period

Over the summers of 2010–2012, the Departments of Mathematics, Physics, and Chemistry at Marshall University will jointly host twelve students for ten weeks of instruction and research in computational science. Each student will extend some carefully-selected and delimited aspect of his or her mentor’s research. Weekly informal meetings will be held to discuss progress and problems. Students will present the results of their research in a symposium to conclude the summer program; afterwards, they will present their research at an appropriate professional conference and will receive co-author credit for any eventual publication. In addition to performing research in a specific area, students will be instructed in practices and issues that are common to all areas of computational science.

Three Marshall University computer science students and faculty are working on a project to build a sensor suite for the United States Navy to be used on autonomous marine vehicles.

The work is being done under a $2.7 million contract from the Navy with Spatial Integrated Systems of Rockville, MD. Marshall University is a subcontractor on the project, according to a report in the Huntington, WV Herald Dispatch.

The goal of the Autonomous Maritime Navigation (AMN) project is to develop integrated hardware and software to enable ships to autonomously navigate in waterways.

The solution requires software-based data fusion from an array of sensors, including sonar, radar, GPS, and digital cameras, according to Venkat Gudivada, a professor of computer science at Marshall University's Huntington, WV campus.

The team is focusing on ways to generate 3D reference points using stereo vision to estimate the distance of obstacles, such as ocean vehicles and coastlines. The resulting system would constitute a form of computer vision that would enable a marine vehicle to steer itself clear, according to the researchers.