It is well known that the digital microscope has led to an explosion of the number of images that the researcher has to deal with. On the one hand, this opens opportunities of gathering enormous amounts of data. On the other hand, tools for automatic image analysis and data management become a necessity.

cellAnalyst is such a tool. It is intended to help the researcher to analyze his microscopy images and manage the output data. Particle and cell analysis is the most immediate application.

This software has been created by AssaySoft Inc [1] is an advanced image-mining tool in a user-friendly package. It is designed to automate the analysis of digital images, especially ones coming from cell biology. It works as follows:

Items 2 and 3 came originally from Pixcavator

It is especially suitable for analysis of cell images, cell counting and classification. Image processing and image management tools are also provided.

More features are planned for the future with the goal of a complete toolbox for high content analysis (HCA) and high content screening [2] (HCS). A web based application is also available. You can download cellAnalyst at [3]. The software comes with a complete user’s guide and a tutorial.

It was initially based on Pixcavator SDK but now it has database capabilities as well. All image analysis data is saved and now you can find all images in your collection that have, say, between 50 and 70 cells of sizes between 100 and 200 pixels. Similar queries are possible with respect to shapes and locations of the cells.

The processing starts with a complete analysis of the image with no deformation, smoothing, blurring, approximation, etc. This allows the user to conduct analysis only once and later display the parts of the output data relevant at that time. The output includes the image with cells’ contours captured and a spreadsheet with locations and measurements of the cells. The displayed measurements and characteristics of the identified cells include area, perimeter, intensity, contrast, and many more.

The software takes advantage of the lossless analysis by being highly interactive. First, the user can instantly change what features are to be counted as cells by moving sliders corresponding to cells’ characteristics. The output data is then updated in real time. As a result, the user can quickly visualize a number of different segmentations and choose the best one. In addition, the software can provide analysis results on different scales; for example, clusters of cells — cells — nuclei, etc. Second, the user can manually exclude features from analysis by simply clicking on them. This allows an easy way of dealing with noise, image imperfections, irrelevant details, etc.

The veracity of the analysis data has been verified using real world images. First, the results have been compared to images of cells analyzed manually. Second, ground truth images were analyzed and the output data was confirmed with the pixel accuracy. The results are reliable and repeatable. Observe that cellAnalyst can also be seen as a visual search engine. Indeed, the search is based entirely on the data extracted from images instead of text, tags, etc. The difference is that its search however is based on concrete data collected from the image: cells quantity, sizes, shapes, and locations. As a result it does not share CBIR problems. 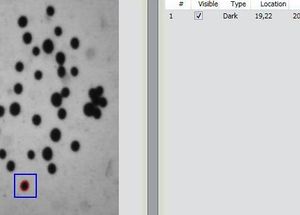 Another feature is Partial Analysis. The user can now start with analysis of just a portion of the image. The user draws a rectangle around a cell, and the analysis instantly determines its size and contrast.

Analysis of images may be a time consuming task especially if the analysis setting have to be determined by trial and error. The time to analyze an image is a function of its size. The larger an image, the longer it will take to analyze it. To get faster analysis, one may start with analysis of just a portion of the image. One way to solve this problem is that user draws a rectangle (Region Of Interest) on the image, and the analysis is done only in that region. If the ROI is small enough (50 x 50 pixels), analysis can be done within a second. User can move the sliders and see the effects instantly. The contours of the objects will move and user will be able to capture the desired objects. Once the analysis settings are determined from the ROI, the complete image can be quickly analyzed using the same settings. See also Analysis strategy.

Other improvements are these:

Besides cell analysis there are numerous examples other applications.