Robustness of topology of digital images and point clouds by Saveliev

Abstract. Such modern applications of topology as digital image analysis and data analysis have to deal with noise and other uncertainty. In this environment, the data structures often appear "filtered" into a sequence of cell complexes. We introduce the homology group of the filtration as the group of all possible homology classes of all elements of the filtration without double count. The second step of analysis is to discard the features that lie outside the user's choice of the acceptable level of noise.

Since Poincare, homology has been used as the main descriptor of the topology of geometric objects. In the classical context, however, all homology classes receive equal attention. Meanwhile, applications of topology in analysis of images and data have to deal with noise and other uncertainty. This uncertainty appears usually in the form of a real valued function defined on the topological space. Persistence is a measure of robustness of the homology classes of the lower level sets of this function \ELZ, \Carlsson, \CZ09, \CZ.

Since it's unknown beforehand what is or is not noise in the dataset, we need to capture all homology classes including those that may be deemed noise later. In this paper we introduce an algebraic structure that contains, without duplication, all these classes. Each of them is associated with its persistence and can be removed when the acceptable threshold for noise is set. The last step can be carried out repeatedly in order to find the best possible threshold. The approach follows the approach to analysis of digital images presented in \Sav1.

First, a gray scale image is a real-valued function $f$ defined on a rectangle. Given a threshold $r$, the lower level set $f^{-1}((-\infty ,r))$ can be thought of as a binary image. Each black pixel of this image is treated as a square cell in the plane. These 2-dimensional cells are combined with their edges (1-cells) and vertices (0-cells) and in the $n$-dimensional case, the image is decomposed into a combination of $0$-, $1$-,..., $n$-cubes. This process is called thresholding. The result is a cell complex $K$ for each $r,$ see \KMM.

Second, a point cloud is a finite set $S$ in some Euclidean space of dimension $d$. Given a threshold $r$, we deem any two points that lie within $r$ from each other as "close". In this case, this pair of points is connected by an edge. Further, if three points are "close", pairwise, to each other, we add a face spanned by these points. If there are four, we add a tetrahedron, and, finally, any $d+1$ "close" points create a $d$-cell. The process is called the Vietoris-Rips construction. The result is a cell complex $K$ for each $r$ \ELZ. 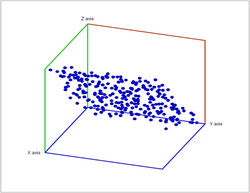 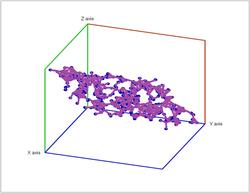 The Betti numbers are computed via homology theory \Bredon. One starts by considering the collection $C_{k}(K)$ of all formal linear combinations (over a ring $R$) of $k-$cells in $K,$ called chains. 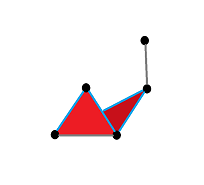 From the chain complex $C_{\ast }(K),$ the homology group is constructed by means of the standard algebraic tools. To capture the topological features one concentrates on cycles, i.e., chains with zero boundary, $ \partial A=0$.

3. Prior work and outline 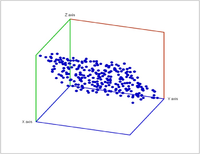 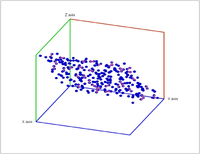 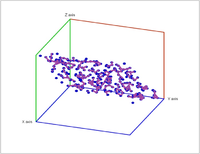 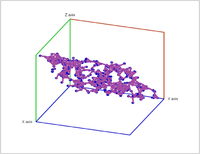 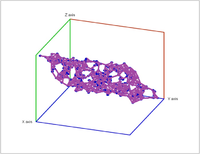 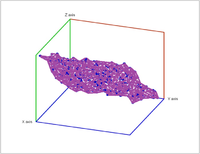 In order to evaluate the robustness of an element of one of these groups the persistence of a homology class is defined as the number of steps it takes for the class to end at $0.$ In other words, \begin{equation*} \text{persistence = death date - birth date.} \end{equation*} The $p$-persistent homology group of $K^{i}$ is defined as the image of $i_{\ast }^{i,i+p}.$ It's what's left from $H_{\ast }(K^{i})$ after $p$ steps in the filtration. Now the robustness of the homology classes of the filtration is evaluated in terms of the set of intervals $[birth,death]$ representing the life-spans, called barcodes, of the homology classes \CZ.

Our approach is somewhat different. It consists of two steps.

We also discuss the computational aspects of this approach (Section 8) and multiparameter filtrations (Section 9).

Our approach provides a coarser classification of the homology of filtrations than the one based on barcodes. The reason is that all homology classes with long enough life-spans, i.e., high persistence, have equal place in the homology group $H_{\ast }(\{K^{n}\})$ of the filtration regardless of the time of birth and death.

4. Motivation: the homology of a gray scale image

In this section we will try to understand the meaning of the homology of the gray scale image in Figure 1 below. For simplicity we assume that there are only 2 levels of gray in addition to black and white. A visual inspection of the image suggests that it has three connected components each with a hole. Therefore, its $0$- and $1$-homology groups should have three generators each. We now develop an algebraic procedure to arrive at this result.

First the image is "thresholded". The lower level sets of the gray scale function of the image form a filtration: a sequence of three binary images, i.e., cell complexes: $K^{1}\hookrightarrow K^{2}\hookrightarrow K^{3},$ where the arrows represent the inclusions. Suppose $A_{i},B_{i},C_{i}$ are the homology classes that represent the components of $K^{i}$ and $% a_{i},b_{i},c_{i}$ are the holes, clockwise starting at the upper left corner. The homology groups of these images also form sequences -- one for each dimension 0 and 1. 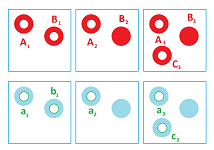 In the following sections we provide formal definitions. All cell complexes are finite.

Our goal is to define a single structure that captures all homology classes in the whole filtration without double counting. The rationale is that if $x\in H_{\ast }(K^{n}),y\in H_{\ast }(K^{m}),$ $y=i_{\ast }^{nm}(x),$ and there is no other $x$ satisfying this condition, then $x$ and $y$ may be thought of as representing the same homology class of the geometric object behind the filtration.

These are a few simple facts about this group.

The stability of the homology group of a filtration follows from the stability of its persistence diagram, i.e., the set of points $\{(birth,death)\}\subset \mathbf{R}^{2}$ for the generators of the homology groups of the filtration, plus the diagonal. It is proven in \CEH that $d_{B}(D(f),D(g))\leq ||f-g||_{\infty },$ where $d_{B}$ is the bottle-neck distance between the persistence diagrams $D(f),D(g)$ of two filtrations generated by tame functions $f,g.$ Function $F(x,y)=y-x$ creates an analogue bottle-neck distance for the set of points $\{persistence\}\subset \mathbf{R} $ and its stability follows from the continuity of $F$.

6. Motivation: the high contrast homology of a gray scale image

To justify our approach to persistence, we observe that some of the features in the image in Figure 1 are more prominent than others. In particular, some of the features have lower contrast. These are the holes in the second and the third rings as well as the third ring itself. By contrast of a lower level set of the gray level function we understand the difference between the highest gray level adjacent to the set and the lowest gray level within the set.

In the case of a Vietoris-Rips complex, not only the barcode, the interval $[birth, death]$, but also the persistence, the number $death - birth$, of a homology class contains information about the size of representatives of these classes. For example, a set of points arranged in a circle will produce a $1$-cycle with twice as large birth, death, and persistence than the same set shrunk by a factor of 2. However, persistence defined as $death/birth$ will have the desired property of scale independence. The same result can be achieved by an appropriate re-parametrizing of the filtration.

In the general context of filtrations the measure of importance of a homology class is its persistence which is the length of its lifespan within the direct system of homology of the filtration.

For 2-dimensional gray scale images, this approach to homology and persistence has been used in an image analysis program called Pixcavator. 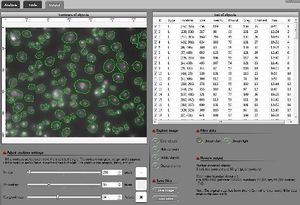 The algorithm described in \Sav1 has complexity of $O(n^{2}),$ where $n$ is the number of pixels in the image.

For the general case, the analysis algorithm may be outlined as follows:

If the user changes the threshold, the last step is repeated as necessary without repeating the rest.

The algorithm above computes the homology group of filtration, as defined, incrementally. This may be both a disadvantage and an advantage. In comparison, the persistence complex \CZ also contains information about all homology classes of the filtration but its computation does not require computing the homology of each complex of the filtration. Meanwhile, the above algorithm may have to compute the same homology over and over if consecutive complexes are identical. Hence, the algorithm has a disadvantage in terms of processing time. On the other hand, the incremental nature of the algorithm makes its use of memory independent from the length of the filtration. Another advantage is that multi-parameter filtrations are dealt with in the exact same manner (see next section).

The inefficiency of the above algorithm can be addressed with a proper algebraic tool. This tool is the mapping cone \Weibel. 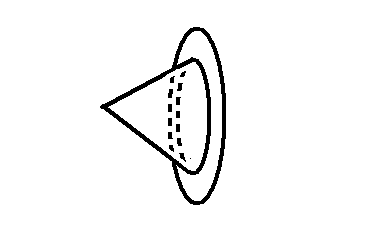 First, color images are thresholded according to their three color channels. 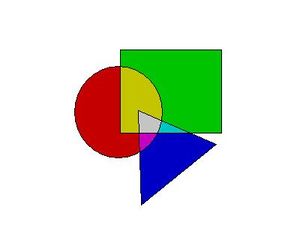 Second, point clouds are "thresholded" by the closeness of their points and, for example, the density of the points.