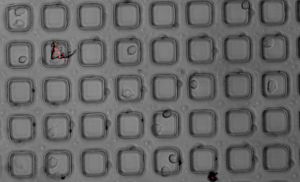 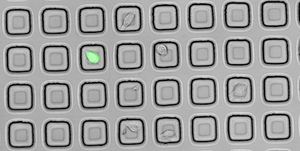 Cells were grown on arrays of microfabricated, releasable elements composed called "cell pallets". The presence of air between the elements restricted the cells to the top surfaces of the pallets. Single pallets situated within large arrays of pallets were released on demand using a single, focused, laser pulse. The pallet array system permits adherent cells to be inspected using conventional microscopy and selected cells released for further analysis.

In order to obtain accurate statistical data on the total number of cells that adhere to the pallets vs. the number of cells that are potential candidates for harvesting using the laser pulse, Pixcavator was used for image analysis. The analysis results separate the cells in microscopic images of the micropallet array from the polymer substrate, and then identify them based on size, intensity, and other criteria. The software was able to automatically distinguish between regular cells and cells marked with a fluorescent protein.

The analysis parameters were selected based on how closely the contours wrapped around the object. The more closely the contours represent the outer edge of an object the more accurate the measurements are. The main parameters used were size and contrast. However, it was found that morphological parameters, such as roundness, would have been useful in distinguishing cells from each other. For instance, a distinction between the regular structure of the micropallets in the background and the cells in the foreground becomes possible.

Detail are given in this paper: