From Mathematics Is A Science
Revision as of 19:58, 21 January 2014 by imported>WikiSysop (→‎Manifolds on the grid)
(diff) ← Older revision | Latest revision (diff) | Newer revision → (diff)
Jump to navigationJump to search

Example. Let consider the quotient of the circle ${\bf S}^1/_{\sim}$ with two different equivalence relations. The circle has neighborhoods of each point homeomorphic to ${\bf R}$, i.e., it's a $1$-dimensional manifold. Now we want to see the effect of gluing on its structure.

Suppose the circle is centered at $0$ on the $xy$-plane.

In other words, each point is identified with the one symmetric with respect the origin (the antipodal point). Then $X = {\bf S}^1/_{\sim}$ is still a $1$-manifold as the image shows. 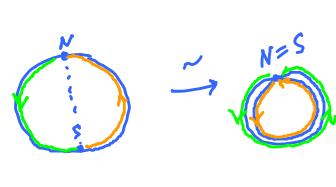 In other words, the edge of the disk is glued to itself, with a twist.

Observe that even though the disk has a boundary, $Y$ is a surface without boundary. Indeed, a point $x$ on the edge has a neighborhood homeomorphic to half-disk but, when it's glued to its antipodal point, the two half-disks form a whole disk.

The end result is called the projective plane ${\bf P}^2$.

Why isn't it, say, the sphere? Because it contains the Mobius band:

Such surfaces are called one-sided, or non-orientable.

Manifolds on the grid

We have defined manifolds in a mathematical, indirect way. For applications, we would like to think about manifolds as certain kind of cubical complexes.

Specifically, how can we define manifolds on the grid?

Of course, we keep the definition, but we want to find an explicit definition of an $n$-manifold.

Recall that for each cell that belongs to the complex, so do all of its faces. What if this $n$-complex is an $n$-manifold?

item 3 above determines if this subset of the grid is an $n$-manifold without boundary:

This is a 1-manifold. 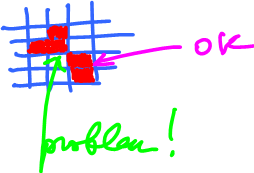 What we expect to see in dimension 2 is a relief:

Suppose $f$ is continuous. Recall the notion of "level curves" from calculus (or more precisely we should be talking about level sets).

Example: It's not always a curve.

But "typically" we see this:

It does look like all of these are curves...

They are. But are they $1$-manifolds?

No, not all of them.

Let's classify the level sets of a twice differentiable function.

Do same for each $b$, on a finite interval there will be only finite number of such $b$'s (follows from compactness). So yes, it's a $0$-manifold.

Let's look for a pattern similar to the dimension $1$ case.

There are a few types of functions then... 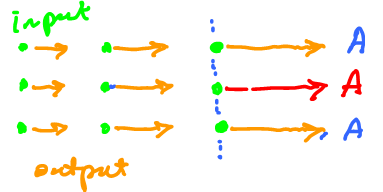 To see why this is bad, consider the case when this does work.

Is it enough to require: neither is $0$?

Then we are looking at the intersection of the graph of $f$ and the plane $z=A$, around the point $(a,A)$. Since $f$ is differentiable, it behaves as the tangent plane, essentially, at $a$. This plane is determined by $f'(a)$ and called also the best affine approximation.

So, it then suffices to consider the intersection of these planes...

2. Suppose $f:R^n \rightarrow R^n$ is a smooth functions satisfying $ff=f$. (a) Prove that $f(R^n)$ is a smooth manifold. (b) What characteristic of $f$ determines the dimension of this manifold.