Now a relation will be established between cells/chains of different dimensions in order to capture the topology of the cell complex. This relation is given by the boundary operator.

the boundary of a oriented (directed) $1$-cells is the $0$-chain: endpoint - initial point.

Now extend this definition to the whole chain complex, by assuming that $\partial$ is a homomorphism (or a linear operator in the vector space case):

In other words we define the boundary operator on the generators (cells) of the group and then extend it to the whole group by linearity. 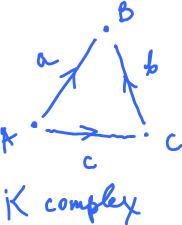 Definition. A chain is called a cycle if its boundary is $0$.

This subgroup is called the cycle group.

We showed that all of these chains are cycles, but how do we know that we've found all of them? Let's solve the problem properly.

Adding however a face to this triangle will make $-a + b + c$ homologous to $0$. See Homology in dimension 2.

Exercise. Compute the homology (by solving a system of linear equations) of the figure eight, represented by a cell complex with (a) $5$ edges, (b) $2$ edges.

For a more concrete way of capturing $0$- and $1$-cycles, see Homology of images.