The PDE of heat propagation

To model heat propagation, imagine a grid of square rooms and the temperature of each room changes by a proportion of the average of the temperature of the four adjacent rooms. Its spreadsheet simulation is seen in the two images below; they are the initial state (a single initial hot spot) and the results (after $1,700$ iterations) for the temperature at the border fixed at $0$:

We will postpone the topic of heat propagation in higher dimensional spaces until later and concentrate on the $1$-dimensional case: the heat is contained in a row of rooms and each room exchanges the material with its two neighbors through its walls.

A careful look reveals that to model heat transfer, we need to separately record the exchange of heat with each of the adjacent rooms.

The process we are to study obeys the following law of physics.

Newton's Law of Cooling: The rate of cooling of an object is proportional to the difference between its temperature and the ambient temperature.

This law is nothing but a version of the ODE of population growth and decay -- with respect to the exterior derivative $d_t$ over time. For each cell there are two adjacent cells and two temperature differences, $d_x$, to be taken into account. The result is a partial differential equation (PDE).

Either is simply the difference in ${\mathbb R}$.

Note: When the domain isn't the whole space, the pipes at the border of the region have to be removed. In the spreadsheet, we use boundary conditions to substitute for the missing data.

The result after $1,500$ iterations is shown next:

One can clearly see how the density becomes uniform eventually -- but not across an impenetrable wall ($k(A_5)=0$).

Exercise. For an infinite sequence of rooms, what is the limit of $U$ as $t\to \infty$?

Exercise. Create a simulation for a circular sequence of rooms. What is the limit state?

Exercise. Generalize the formula to the case when the permeability of walls depends on the direction.

We now consider the general case of edges/rooms of arbitrary size. Then what determines the dynamics of the heat transfer isn't the amount of heat $U(a)$ in room $a$ but its temperature, i.e., the average amount of heat: $U(a)/|a|$.

In summary, the amount of heat exchanged between two rooms is proportional to:

They are given by, respectively:

Conclusion: The amount of heat exchanged by a primal $1$-cell $a$ with its neighbor $a'$ is

To confirm these ideas, we run a spreadsheet simulation below:

Exercise. Find the speed of propagation of the material in a uniform grid as a function of the length of the cell.

Exercise. Suppose we have two rods made of two different kinds of metal soldered together side by side. The cells will expand at two different rates when heated. Model the change of its geometry and illustrate with a spreadsheet. Hint: Assign a thickness to both.

The PDE of wave propagation

Previously, we studied the motion of an object attached to a wall by a (mass-less) spring. Imagine this time a string of objects connected by springs: 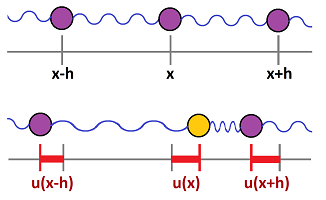 Just as above, we will provide the mathematics to describe the following three parts of the setup:

Let $u(t,x)$ be the function that measures the displacement from the equilibrium of the object associated with position $x$ at time $t$ (we will suppress $t$). It is an algebraic quantity: $$u=u(t,x)\in R.$$ As such, it can represent quantities of any nature that may have nothing to do with a system of objects and springs; it could be an oscillating string: 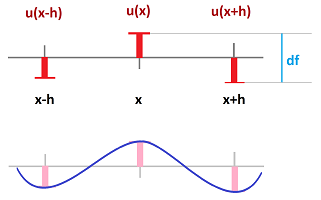 Here, the particles of the string are vertically displaced while waves propagate horizontally (or we can see the pressure or stress vary in a solid medium producing sound).

First, we consider the spatial variable, $x\in {\bf Z}$. We think of the array -- at rest -- as the standard $1$-dimensional cubical complex $L={\mathbb R}_x$. The complex may be given a geometry: each object has a (possibly variable) distance $h=\Delta x$ to its neighbor and the distance between the centers of the springs has length $\Delta x^\star$. We think of $u$ as a cochain of degree $0$ -- with respect to $x$.

Second, we consider the temporal variable, $t\in {\bf Z}$. We think of time as the standard $1$-dimensional cubical complex ${\mathbb R}_t$. The complex is also given a geometry. It is natural to assume that the geometry has no curvature, but each increment of time may have a different duration (and, possibly, $\Delta t \ne \Delta t^\star$). We think of $u$ as a cochain of degree $0$ with respect to $t$.

Simulating wave propagation with a spreadsheet

Now we will derive the recurrence relations.

We suppose, for simplicity, that $\alpha=1$.

Exercise. Implement a spreadsheet simulation for the case of non-constant $m$. Hint: you will need two buffers.

Example. The simplest propagation pattern is given by $\alpha=1$. Below we show the propagation of a single bump, a two-cell bump, and two bumps: 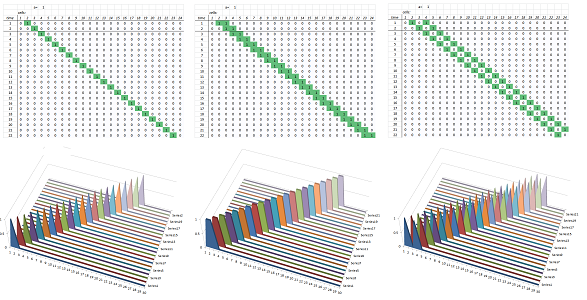 Exercise. Modify the spreadsheet to introduce walls into the picture:

Exercise. Modify the spreadsheet to accommodate non-constant data by adding the following, consecutively: (a) the stiffness $k$ (as shown below), (b) the masses $m$, (c) the time intervals $|\Delta t|$.