Convergence of the discrete to the continuous 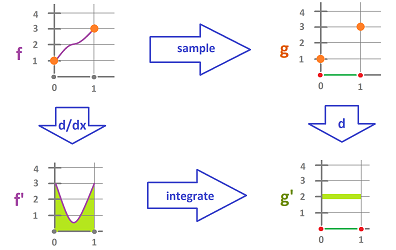 $$dg\Big([a,b] \Big):= \displaystyle\int_{[a,b]}f'dx.$$ The result is the same. Then we can say that calculus and discrete calculus develop in parallel.

But does the latter approximate the former? Will increasing the “resolution” of the discretization allow us to recover the original? What about convergence?

Example. Recall that the integrals of step-functions approximate the integral of a function, i.e.e, the area under its graph. 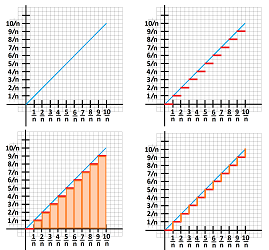 Exercise. Use other step-functions to approximate the length of the diagonal segment.

Example. Let's use step-functions to approximate the area and the length of the circle: 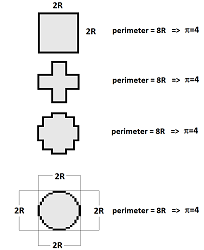 We can find other examples when a discrete geometry fails to mimic its continuous counterpart.

Exercise. Show that this is the case of the diagonal spread of liquid not being quite diagonal:

Exercise. What about the pattern of heat transfer below? 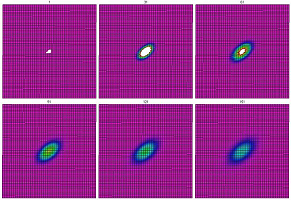 These mismatches are examples of the frequent lack of convergence of the discrete to the continuous. 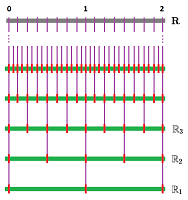 As $g_k$ are constructed from $f$ by sampling, the meaning of convergence is obvious: 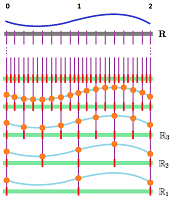 Next, what about convergence of the integrals?

If, instead, we sample the original function, the approximations are non-trivial but they do converge.

We rephrase the familiar result from calculus about left-end approximations of the Riemann integral.

Next, what about convergence of the derivatives?

Exercise. Show that, in this case, all the values of the derivative $f'$ of $f$ are the limits of sequences of values of $g_k'$, under the assumption that $f$ is continuously differentiable.

We rephrase a familiar result from calculus.

Exercise. Prove the theorem. Hint: use the Mean Value Theorem.

Exercise. Provide a similar analysis for a convergent sequence of functions, $f_n\to f$.

If we can't find $y$ explicitly, we think of the differential equation as a formula by which the slope of the tangent line to the graph of $y$ can be computed at any point on the curve, once the location of that point is known.

Each approximation will be a $0$-form $f$ on a complex that represents $[A,B]$ that satisfies the same initial condition, $f(A)=X$. It is built as follows.

On a finite interval, this approximate solution does not deviate too far from the original, unknown curve. Furthermore, the difference between the two curves can be made as small as we like by choosing the step size small enough. The general result is as follows.

Exercise. Provide the analog of the above theorem for ODEs of chain maps $f:C(K)\to C({\mathbb R})$.

How do we measure the length of a curve in a digital image?

In order to understand the contents of an image, we need to be able to do some basic measurements of what is shown.

Example. Suppose we want to use computer vision to count nuts and bolts in an image:

Suppose we have detected and captured these objects. We can find their areas. However, since some of these objects have about the same size in terms of the area, we have to look at their shapes. We want to be able to evaluate shapes of objects and the most elementary way to do it is to compare their areas to their perimeters. The ability to compute lengths becomes crucial. $\square$

Specifically, we use roundness of objects, which is $$Roundness = 4\pi \frac{area}{perimeter^2}. $$ The roundness will tell circles from squares and squares from elongated rectangles. For example, a circle's roundness is $1$; while two rectangles may have the same area but a very different roundness:

In binary images (and cubical complexes, curves are represented as sequences of adjacent edges. 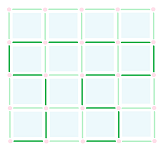 Exercise. Show that the area is independent of digital representation, in the above sense.

Example. Here is a simple example: the perimeters of a square and the inscribed circle are the same!

Indeed, it takes exactly as many vertical and horizontal steps to get from the left end of the circle to the top - no matter whether you make just one turn or many. The curve isn't really a curve... $\square$

Example. Let's consider a simpler example in more detail. If $r$ is the size of the pixel, a line segment of length $a$ will be represented by, roughly, $a/r$ pixels... but only if it is placed horizontally or vertically!

If it is placed diagonally, there will be $\sqrt{2}a/r$ pixels arranged in the staircase pattern. Thus we have the following:

Conclusion: the length depends on the orientation of the curve with respect to the grid of the image. $\square$

The problem described here is also known as “Weyl's tile paradox” in physics.

We may try to deal with this problem the same way one would deal with other accuracy problems -- by increasing the resolution of the image. In fact, a curve can be approximated by a digital curve with any degree of accuracy:

Unfortunately, the error is independent of the resolution.

Example. Ignoring the error may be dangerous. The roundness is supposed to be lower for elongated objects, like bolts. Let's consider again what was shown above.

Thus, a horizontally oriented rectangle with proportions about $1$-to-$5$, just as in the image above, will have the same measurements as a diagonally oriented square. We can't tell a bolt from a nut... $\square$

A possible remedy may be to break the curve into longer pieces. Every time we have a triple of consecutive points arranged in a triangle we should replace $1+1=2$ in the computation with $\sqrt{2}$. The result is that now, at least, all $45$ degree segments have correct lengths!

But what about $30$ degree segments? Consider segments with $2$ horizontal steps followed by $1$ vertical. Then 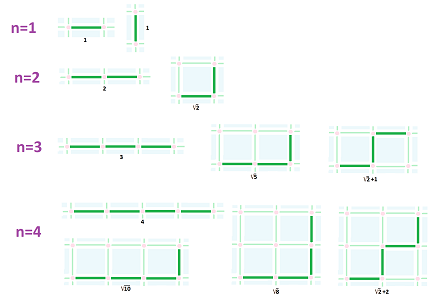 As the length of the edge approaches $0$, the length computed this way should converge to the “true” length. We prove that in general it does not:

For a given $n$, the relative error is constant for any resolution.

An informal "explanation" is that once $n$ is chosen, the number of possible angles that curves of $n$ steps can generate is finite. Then, there are slopes that are missed and they cannot be approximated...

A more general about the relative errors of these approximations is as follows.

It might seem counter-intuitive that the approximations fail to converge to the correct length.

In fact, one might recall from calculus that the arc-length of a curve is defined as the limit of approximations of the curve by line segments. The difference is that here the end-points of the segments lie exactly on the curve while in our construction they may be -- within a pixel -- off the curve. As a result, in the latter case all slopes are permissible while in the former only finitely many, as we have seen. This is why these combinations of segments do converge as functions (with respect to the sup-norm) but their derivatives don't! Considering that the derivative appears in the arc-length formula itself, we shouldn't be surprised to see that there is no convergence of the lengths without convergence of the derivatives, i.e., the slopes.

A calculus-free explanation is that the geometry of ${\bf R}^2$ (and the universe) is independent of direction, i.e., isotropic. Limiting ourselves to grids with fixed directions makes our approximation of this universe anisotropic. And making the grid finer and finer won't make it isotropic.

Indeed, let's take a look at these are possible angles from a few grids:

We can always find an angle that isn't there! Then the difference of the slopes of this line and the nearest grid line determines the relative error of the approximation of the length.

Conclusion: the approximation scheme we have used is invalid.

Solution: make the set of available angles in the approximations denser and denser.

This is a way to do it: a sequence of square grids that alternates between 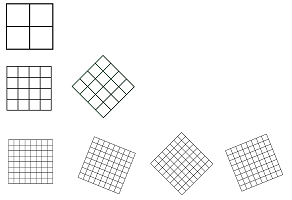 Proof. For the sake of the proof we assume that it is the segment $L$ that is rotated:

The problem we faced in the last subsection is resolved!

Now, what about actual curves?

For the general setup, suppose $C$ is a rectifiable curve in ${\bf R}^n$ with arc-length $|C|$. To approximate it we follow the idea of the definition of the Riemann integral. Suppose we have