Transversal section of a root

This image analysis example came from a biology researcher: "I'm sending a picture of a preliminary test but I'm no sure if the output number label as size area is a real measurement, I need to calculate the blue bright and the blue dark areas show in the picture....in the picture appear a transversal section of a cassava root (a tropical tuber), I need to calculate the blue light area, or the blue dark area of this transversal section, I thought that pixcavator can calculate approximately irregular areas." 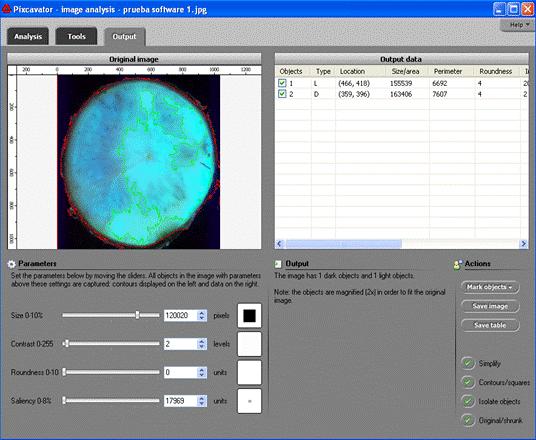 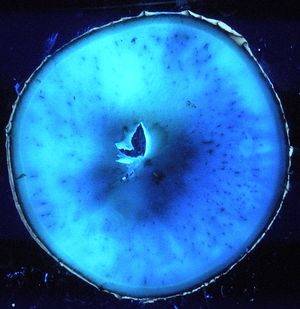 I re-analyzed the image. First I set the shrink factor at 2 (processing images around 2000x2000 takes some memory), then I increased the brightness to the max (under Tools), then I pushed "Green channel" (see RGB channels), then "Run", then adjusted the settings: 29095-89 (does not have to be exactly that), then I unmarked dark objects. The result is the area of the root measured. You can see the result in the image and the measurement in the spreadsheet. 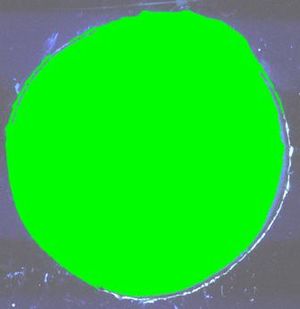 There is no clear boundary between dark blue and light blue. So, you will have to move the sliders a bit to find contours that you like. Alternatively, you draw (see Pixcavator technical support) a contour yourself with MS Paint or similar. Then the analysis will be unambiguous. 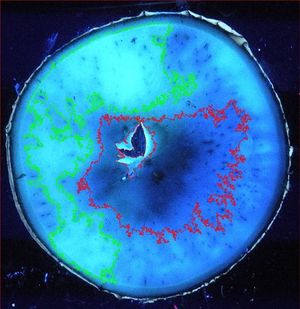 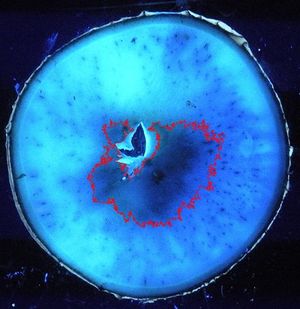 From the paper: "Cassava (Manihot esculenta) is the most important root crop in the tropics and due to its drought tolerance, ability to grow in poor soils, and resistance to herbivore, cassava is well suited for cultivation by subsistence farmers. However, its use and expansion is constrained by rapid physiological post harvest deterioration (PPD)... Presented here is the use of a standard subjective rating in comparison to the accumulation of hydroxycoumarin fluorescence during PPD... Digital images for each slice were analyzed using Pixcavator Image Analysis Software v 3.1 (Intelligent Perception, Huntington, WV, USA) with the following settings: JPG format, green-blue channel, shrink factor 4."