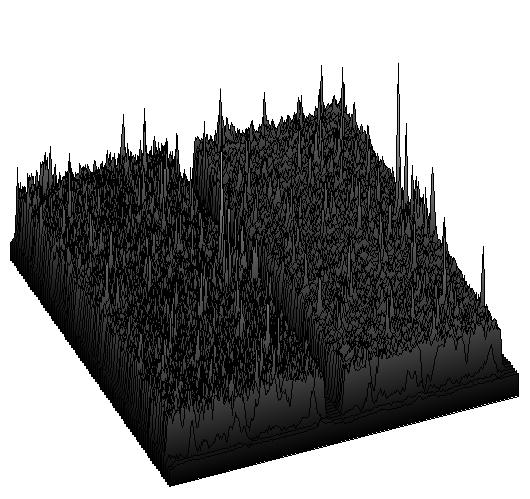 The main issue however is this:

How much do they vary? The answer will give you the best possible accuracy of the measurement.

The goal was to test the approach in order to see of it's possible to track emitters from frame to frame and for that I used Pixcavator. I picked a couple of frames, fairly far apart from each other and converted them to bmp images. I analyzed each with Pixcavator with the same settings (15-50). The number of emitters detected was quite different but I was only interested in the ones easiest to track. I saved the lists of objects to Excel for both images. Then I put the coordinates (multiplied by 100) from the first image vertically and from the other horizontally (I had to transpose), and computed the distances between them in a large table. The entries with distance <100 are in red. These clearly correspond to the same emitters (not doubles) in these two frames. However, the distances are quite large:

pixels. So, the approach seems to work but the accuracy is low.

Instead of using the centroids of the spikes (as Pixcavator normally does), I used the centers of mass. The results are better. The distances are:

See other examples of image analysis.