Definition. Suppose $X$ is any set. A collection $\gamma$ of subsets of $X$ satisfying the properties of:

is called a basis of neighborhoods in $X$. The elements of $\gamma$ are called neighborhoods, and if $x \in W \in \gamma$, we say that $W$ is a neighborhood of $x$. We commonly use $W_x$ to emphasize this.

The purpose of this definition is to enable us to discuss continuity of functions in the most general setting. Indeed, $X$ doesn't have to have either algebraic (such a vector space) or geometric (such as a metric space) structure.

Now, we can modify this collection $\gamma$ by choosing open intervals with the end-points:

The proof of the refining condition above won't change!

Exercise. Find more examples of $\gamma$ for the line that satisfy (B1) but not (B2). Hint: try to narrow the choice of the possible centers.

Exercise. Prove that the collection of all open arcs is a basis of the circle.

We will call this the standard Euclidean basis.

Exercise. Prove this statement. Hint: you have to be specific.

Exercise. Prove that this is a basis.

The sets of all:

Exercise. Prove that disks with rational centers and/or radii form a basis.

Exercise. Provide a similar construction for parametric surfaces. What happens to these bases if there are self-intersections? What difference does continuity make?

Below, we assume that $\gamma$ is fixed.

Now we define open sets as the ones where every point has its own neighborhood:

For example all “open” balls and “open” squares are open.

Exercise. What sets are open with respect to the set of all right rays?

Theorem. The intersection of two open sets is open.

We start with some analysis. We will need to write the definition three times for each of the three sets involved.

Fortunately, the refining condition (B2) will give us the desired -- smaller -- neighborhood of $x$.

We are now prepared to write the proof.

The construction is illustrated below:

The illustration is inserted after the proof to emphasize that the latter can't rely on -- or even refer to -- pictures.

What about the union? Let's try to recycle the proof for intersection. After all, we will have to use the definition of openness three times again.

Theorem. The union of two open sets is open.

Proof. We copy the proof from above and replace each $\cap$ with $\cup$. This is what we get:

Turns out, the part in brackets is unnecessary. Instead we just choose either $B=P$ or $B=Q$ depending on whether $P$ or $Q$ contains $x$.

Why the proof is easy is illustrated below: 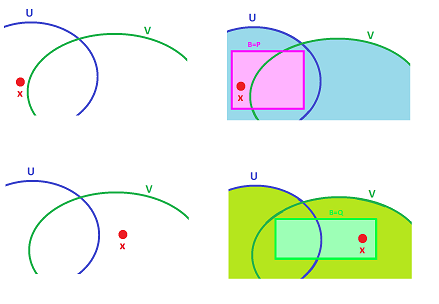 Theorem. The union of any collection of open sets is open.

Exercise. Prove this theorem (a) by following the proof of the last theorem, and (b) as a corollary.

Of course, a subset $A\subset X$ will be called closed if its complement $X \setminus A$ in $X$ is open.

From bases to topologies

Let's summarize the results of the last subsection.

Theorem. Given a basis of neighborhoods $\gamma$, let $\tau$ be the set of all open sets with respect to $\gamma$. Then $\tau$ satisfies the following conditions:

Definition. Given a basis of neighborhoods $\gamma$, the collection $\tau$ of all sets open in $X$ with respect to $\gamma$ is called the topology of $X$ generated by $\gamma$.

A basis can now be easily enlarged with open sets.

We can refine the basis of disks $B(x,\epsilon)$ with that of squares $S(x,\delta)$ and vice versa: 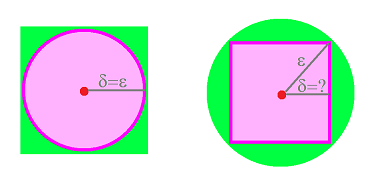 Exercise. Prove the lemma and the theorem.

Exercise. Prove that it is.

Disks refine quadrants but not vice versa! This suggests the following.

Exercise. Prove the theorem. Hint: you just need a single example of an open set.

When two bases generate the same topology they are called equivalent.

Exercise. Determine which of the following collections are bases of neighborhoods; find their topologies when they are, and identify the equivalent ones:

Exercise. Provide formulas for these neighborhoods on the cylinder and the ring and prove that they form a basis: 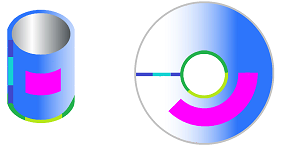 From topologies to bases

We may choose to enter Topology, as we did, through the door that leads to the bases of neighborhoods and then to the topologies, or we might start with the topologies. We simply turn a theorem into a definition, as follows:

Definition. Given a set $X$, any collection $\tau$ of subsets of $X$ is called a topology on $X$ if it satisfies the following three conditions:

The elements of $\tau$ are still called open sets.

The set paired up with a topology, $(X,\tau)$, is called a topological space.

We restate the above theorem as a relation between bases and topologies.

Theorem. Given a basis $\gamma$, the collection $\tau$ of all sets open with respect to $\gamma$ is a topology.

In this case, we still say that basis $\gamma$ generates topology $\tau$.

The dissimilarity is in the fact that there is no requirement for a basis of neighborhoods to be as small as possible. In fact, $\tau$ is generated by $\tau$.

Theorem. The intersection of any finite collection of open sets is open.

Since we defined continuity in terms of open sets, the idea of what functions are continuous will entirely depend on the choice of topology for our spaces. Here, we investigate path-connectedness in this environment.

We will need these three things here: 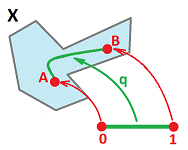 $\bullet$ the topology of $[0,1]$ is Euclidean generated by the set of all open intervals $\gamma$.

You are to demonstrate now how misleading the above illustration is.

Exercise. Suppose $X,Y$ are two topological spaces, one of which is (a) discrete or (b) anti-discrete. Determine under what circumstances a function $f:X\to Y$ is continuous. Specifically, answer these questions:

Exercise. Use the last exercise to discuss path-connectedness of the discrete and anti-discrete topologies.

The diagram below illustrates the idea that simple topological concepts, such as path-connectedness, are meaningless until the topology is specified. Two sets, the interval $[0,1]$ and two points $\{0,1\}$, are equipped with various topologies and then path-connectedness is determined for either of them.

It appears that the two topologies at the two extremes of our hierarchy are, indeed, extreme.