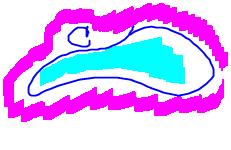 Jordan theorem. The complement of a closed curve with no self-intersections ("simple curve") in the plane has two connected components.

Higher dimensional generalizations are obvious: The complement of an $n$-manifold in the $(n+1)$-dimensional Euclidean space has two connected components.

The theorem doesn't work in the digital image analysis environment as the curve is always thought of as made of pixels (hence all the mess with adjacency).

This is a version of Jordan theorem for cubical complexes (similar for cell complexes):

The complement of a closed curve $C$ with no self-intersections as a $1$-dimensional cubical complex in the plane is the union of two disjoint sets, the closures of which are connected cubical complexes $A$ and $B$ with intersection equal to $C$.