Our objective in this article is to show that the method of processing Grayscale Images applies - with minor modifications - to other single parameter images. Recall the main idea:

Any image is represented as a combination of binary images.

This time we start with a collection of binary images and show how they are produced from real life images.

In this chapter the method is developed for 2-dimensional images with 1 parameter. In other words this is simply a sequence of binary images. We will refer to then as image sequences. The main examples are the following.

The algorithm in Binary Images partitions each frame of the image into black and white regions. These regions are bounded by 0- and 1-cycles respectively. The areas and perimeters of these regions are computed. In addition, the cycles in every frame are related to the cycles in the previous and next frames via a graph. So far this appears exactly similar to Grayscale Images. Observe, however, that in the case of gray scale images (#1) the (dark) objects in the sequence always grow. In the case of dilations applied to a binary image (#4), the objects also grow. But in the case of erosions, the objects will shrink. In #2 and #3 the objects may expand in one area and shrink in another. Therefore, the cells are not only added as previously but also removed. This also affects the graph. Indeed, 0-cycles not only merge but also split, while 1-cycles not only split but also merge. This will be discussed shortly.

Recall that the more important part of this graph, called the frame graph, consists of the connections of cycles in the current frame to the ones in the next. Its links reflect merging and splitting of cycles as we move from frame to frame.

Based on this information, lifespans of cycles are computed. The last step is image simplification. Simplification will remove unwanted items, such as noise, from the image. The user simply indicates the ranges of sizes and contrasts of the objects he considers to be noise. The method removes all objects with these characteristics. The topological characteristics of both the original and the simplified image are computed.

The step of the algorithm

The AddCell command is exactly the same.

The RemoveCell command first removes the pixel itself by creating a node for the 1-cycle made of its 4 edges. Then it removes each of these 4 edges one by one provided it is not an edge of another pixel. RemoveEdge either creates one node if it is a merge or two nodes if it is a split. The links for these nodes come from the SplitCycle and MergeCycles commands described below. Next, each of the 4 vertices of the pixel is removed unless it is a vertex of another pixel. RemoveVertex removes the corresponding node from the graph.

AddVertex is exactly the same. 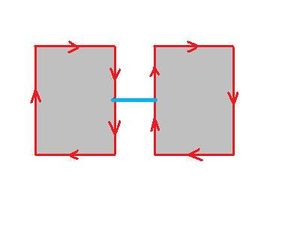 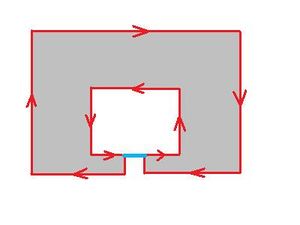 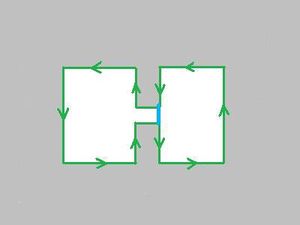 Next, we describe under what circumstances MergeCycles and SplitCycle are executed. In Binary Images there are 3 cases. Now there are 6 cases. The first three are about adding edges, so they are the same as before and AddEdge is the same as before. We repeat those for convenience.

(a) If the edge being added connects two different 0-cycles, they are merged. MergeCycles with these two 0-cycles as the input creates a new 0-cycle. Its birth-frame is that of the older of the parents. The 0-Betti number goes down by 1.

(c) If the edge being added connects a 1-cycle to itself, this cycle is split. SplitCycle with this cycle as the input creates two new 1-cycles. The birth-frames of these are that of the father. The 1-Betti number goes up by 1.

(d) If the edge being removed is a part of a 0-cycle and a part of a 1-cycle, these cycles are merged. MergeCycles with these cycles as the input creates a new (same) 0-cycle. Its birth-frame is that of the 0-cycle. The 1-Betti number goes down by 1.

(e) If the edge being removed is a part of two 1-cycles, the cycles are merged. MergeCycles with these cycles as the input creates a new 1-cycle. Its birth-frame is that of the older of the parents. The 1-Betti number goes down by 1.

(f) If edge being removed is only a part of a 0-cycle, the cycle is split. SplitCycle with this cycle as the input creates two new 0-cycles. Their birth-frames are that of the father. The 0-Betti number goes up by 1.

Next, we describe how MergeCycles and SplitCycle are executed. Computation of lifespans is necessary.

Recall that for SplitCycle the numbers dim1, dim2 are the dimensions of the new cycles. As a result, a cycle of dim1 or dim2 is gained.

Recall that for MergeCycles the number dim is the dimension of the new cycle. As a result, a cycle of dimension dim is lost.

The lifespan based simplification of image sequences

Recall, the output of the algorithm after every frame has been processed is the collection of all current cycles. Next, the Evaluation command either accepts or rejects each cycle. First, the current cycles with low area are marked as inactive (or rejected and not recorded into the graph of the simplified image). The result is a simplified frame graph.

An important characteristic of a cycle is its lifespan. A component emerges at frame B (birth) and merges with the surrounding area at frame D (death); a hole emerges at frame B and is filled at frame D. The total lifespan is D - B. In the present version, the current lifespan, N - B, where N is the number of the current frame, is used to decide whether the feature should be plotted.

The user can customize this program to gain more control. First, he can create his own image sequences from still images - gray scale, color, increasing or decreasing resolution, erosion, dilation, as well as any combinations of them. He can also create his own Evaluation function by choosing his own integrands, or his own settings.

In a movie, a given cycle and all its descendants can be plotted in the same color throughout all frames to help track an object. For a 3D image, if the cycles in each frame are plotted in the corresponding level in 3D, they render the surface boundaries of the components of the image.

To simplify the image we evaluate cycles. To evaluate the cycle, below we consider its area and length and its lifespan. Here, as before, the minimal area, minArea, and the minimal length, minPerimeter, are the same for all cycles independent of dimension or location. These are the main simplification settings.

Recall that to visualize a gray scale image, active 0-cycles are filled with the current gray level while the active 1-cycles are filled with white. Suppose the image sequence comes from a video. Then, for each frame, a similar recoloring procedure that switches between black and white is carried out. For a 3D image, the same is done for each slice before they are combined into a 3D picture.

Simplification and visualization of a point cloud is carried out as follows. First it is thickened. It is done until the set is connected (or the Betti numbers fall within the desired range), or for as many steps as set by the user. This is followed by a topology preserving erosion. The result is a binary image.

The topology preserving version of the algorithm is given below.

Running through the list of current cycles gives us the total number of cycles of each dimension, up to simplification. This provides the count of objects within the image sequence.

Problem Add to TraverseCycle the option of recording the edges in a separate file. Plot them.

Problem Add the option of simplifying the image based on the combination of area, perimeter, and contrast. Experiment with the program.