The algebra of plumbing

We have been looking at the subsets of the sets of nodes and edges to study the topology of the graph. Next, we will pursue this analysis via a certain kind of algebra. We introduce this algebra with the following metaphor:

One can think of a graph as a plumbing system that consists of a network of pipes and joints. There is no water yet. 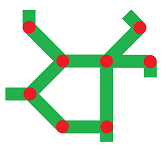 To approach the topology of this system from the algebraic point of view, let's also assume that each joint and each pipe is equipped with an on-off switch.

Suppose the plumbers are told only to “flip the switch” when necessary. Then two consecutive flips cause the switch to return to its original position. Furthermore, a sequence of such commands will result in a simple command: either “flip the switch” again or “do nothing”. Of course, these two commands are represented as $1$ and $0$ and combining these commands is captured by the binary arithmetic of ${\bf Z}_2$: $$0+0=0,\ 1+0=1,\ 0+1=1,\ 1+1=0.$$

Now, this activity is happening at every joint. The plumber – call him the joints guy – receives complaints from the tenants about a possible leak in a given joint and a request to flip its switch. 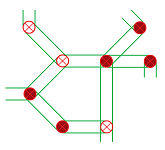 Then a combined request is to flip a selection of switches, such as:

Also, there is another plumber – call him the pipes guy – who flips the switches of pipes by request from the tenants. A combined request is to take care of a selection of pipes, such as: 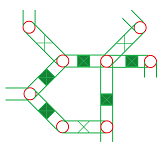 Again, the pipes listed may appear several times and the requests may be issued at any time and combined with the outstanding one, using binary arithmetic. The set of all requests form a group: $\left( {\bf Z}_2 \right)^m,$ where $m$ is the number of the pipes in the network.

Now, there is no overlap between the activities of the two plumbers so far, and there is no relation between any two joints, or any two pipes, or a joint and a pipe. However, what if the pipes guy doesn't show up for work? Then one may try to replace his request, such as

with a request for the joints guy. The choice of a substitution is obvious, if imperfect:

The result is a function, from pipes to joints: $$a=AB \ \mapsto \ A+B.$$ This is the key -- an algebraic way to link the network together.

Exercise. How can the pipes guy try to help the joints guy?

The tenant only knows the plumbing in his apartment and the plumbers only flip switches. However, if one has access to all plumbing requests and, especially the substitutions, he can use the algebra described above to understand the topology of the whole network. We proceed to develop this theory.

Chains of nodes and chains of edges

We will now approach topology of graphs in a fully algebraic way as the first step in our study of homology theory.

Suppose we are given a graph $G$:

We have seen the importance of subsets of these sets. First, combinations of nodes form components:

In order to deal with these sets, we follow the idea from the last section and impose algebra on vertices and edges in the following very deliberate manner.

It's as if revisiting a node or an edge removes it from consideration...

A chain of edges

Its realization is shown below:

We recognize these as abelian groups. Recall that an abelian group is a set $X$ with a binary operation called addition $$x,y\in X \Rightarrow x+y\in X,$$ such that

Now, the relation between the edges $E$ and the nodes $N$ is simple:

the two end-points of an edge are nodes of the graph.

However, since there are two nodes for each edge, we cannot capture this relation via a function $E \to N$. But it can be done for the groups of chains! This is the key step:

Example. Here is an example of a chain of edges (blue) and its boundary, a chain of nodes (red):

As a crucial step, for any graph $G$ we have a homomorphism $$\partial = \partial _G: C_1(G) \to C_0(G),$$ called the boundary operator. We will demonstrate that this operator contains -- in the algebraic form -- all information about the topology of the graph!

Example. Let's present the boundary operator for the graph from the last section:

We have, of course,

Exercise. Compute all boundaries of all chains of edges for this graph.

We already know that the issue is challenging because multiple cycles may go around a single hole: 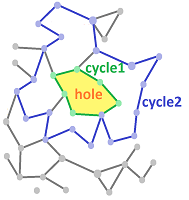 We won't examine them all one by one but, instead, use the boundary operator to capture the relation between them.

In fact, the topology of (any realization of) the graph is hidden in the algebra, as we shall see. And this algebra is revealed by the behavior of graph's boundary operator. For example, compare

Exercise. State and prove this statement in general.

This makes $Z_1$ a subgroup of $C_1$. The “size” of a group is measured by its rank (or, in the language of linear algebra, its dimension).

Example. Some simple algebra is sufficient to find the group of cycles for our example graph:

So, our algebraic-topological conclusion is that for any graph $G$, $$\# \text{ of holes of } |G| = \operatorname{rank} \ker \partial _G.$$ In linear algebra, the number $\dim \ker \partial$ is known as the “nullity” of the linear operator.

What about the components? The problem we are to solve is often called component labeling:

Let's review what we know. We defined, in parallel, two equivalence relations in two different realms and then counted their equivalence classes:

Now, let's try to understand what we need to change in the latter in order to make our analysis fully algebraic: we need to progress from nodes and edges to chains of nodes and edges. We approach the problem in a fashion similar to that in the last subsection:

First we realize that

Example. Suppose we are given a graph:

But these chains of edges don't have to be just paths. Why not two paths? Why not just join these two into one chain:

So, our definition is very simple.

Example. Let's find the group of boundaries for our example graph:

Exercise. Modify the above analysis when edge $AD$ is added.

The boundary group isn't the goal of our quest however. This group represents the redundancy that needs to be removed from the group of chains!

Let's review the quotient construction for abelian groups and vector spaces as it will re-appear many times.

The question now is, of course, what about the rest of $L$?

For the end-result to be a group we need to make sure that the equivalence relation we are constructing respects the algebraic operations of $L$. We then extend the above equivalence $\sim$ to the whole $L$ by invoking its algebra:

Then each equivalence class is a line: 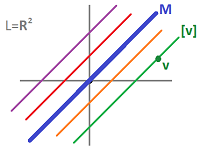 We can clearly see the partition induced by this equivalence relation. 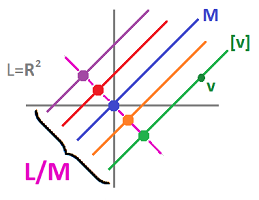 A visualization of free abelian groups, such as $L={\bf Z}^2$, would be similar; those lines will be dotted.

Theorem. The quotient set $L/M$ is a group with the operation of addition:

and, in the case of vector spaces, also scalar multiplication:

Example. In the above example, we can collapse the equivalence classes in a particular way so that they “form” a line. The line is $y = -x$ and it is perpendicular to $M$. Then, one may, informally, suggest an isomorphism of vector spaces: $$L \cong M \times L/M. $$ 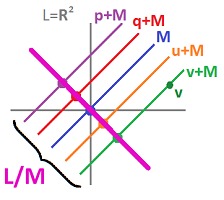 However, a choice of any other line through $0$, other than $M$ itself, would be just as valid an illustration of this idea.

and as sets of points:

Homology as a quotient group

Below we visualize what we are after:

Here, each color corresponds to an element of our group including zero (white). Meanwhile, we mark one -- with a star -- in each as a representative.

Indeed, we are after the components of the graph. They are exactly what's left once the boundaries are removed from consideration. As discussed above, we remove a subgroup $B$ from group $C$ not by deletion but by taking the quotient $H=C / B$ modulo $B$: 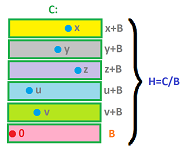 Here the denominator $B$ becomes the zero of the new group.

We will see later that, for an arbitrary dimension $n$ and an arbitrary space $X$, the homology group $H_n(X)$ of $X$ captures the interaction between:

It is defined as $$H_n(G) := Z_n(G) / B_n(G).$$ As we have seen, this analysis applied to graphs is much simpler than that because there are only two classes of chains. Then:

This is the summary of homology theory for graphs: 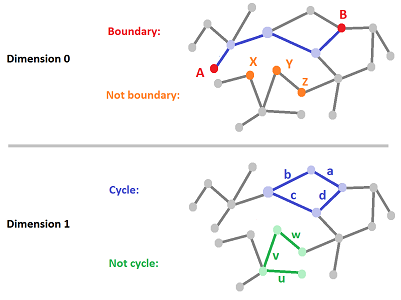 An example of homological analysis

Let's now present the complete analysis of the topology of a graph.

Its realization may be this:

Conclusion: The number of components is $2$.

Exercise. In a similar fashion compute the homology groups of the graph of $n$ edges arranged in (a) a string, (b) a circle, (c) a star.

Exercise. In a similar fashion compute the homology groups of the graph of edges arranged in an $n\times m$ grid.

Exercise. Compute the homology groups of an arbitrary tree.