Previously, we have proved one of the two main topological theorems of elementary calculus, the Intermediate Value Theorem: a continuous function $f:[a,b]\to {\bf R}$ attains all the values between $f(a)$ and $f(b)$. It follows from this theorem that the image of a path-connected space (under a continuous map) is a path-connected.

The second main topological theorem from Calculus 1 is:

Our immediate goal is to prove the theorem while developing some profound topological tools and ideas.

In a calculus course, one is supplied with examples of how the above theorem fails if we replace the domain interval $[a.b]$ with other kinds of intervals: $(a,b), [a,b), (a,b], [a,\infty)$, etc. Here, on the surface, two separate conditions about the interval are violated: these intervals are either not closed or not bounded. We will seek a single condition on the domain of the function that would guarantee that the theorem holds. As the counterexamples show, it will have something to do with the convergence of a sequence $f(x_n)$ while $x_n$ is approaching the complement of the domain:

To understand what's going on, we will rely on the following familiar concept. A point $x$ in a topological space $X$ is called an accumulation point of subset $A$ of $X$ if for any neighborhood $U$ of $x$ $$U \cap (A \setminus \{x\}) \neq \emptyset.$$ Then, what makes a difference is that every sequence in $[a,b]$ appears to have an accumulation point -- the condition that fails for the all other intervals.

Since, as we know, sequences aren't an adequate tool for studying topological spaces in general, we will look at all infinite subsets.

$A$ has no accumulation points.

Note: The former case means that $x$ is an isolated point of $A$.

The two cases indicate that each element of $\alpha$ contains, at most, one element of $A$. Therefore, their cardinalities are related by this inequality: $$\#A \le \# \alpha .$$ Let's consider a specific example that illustrates this construction. 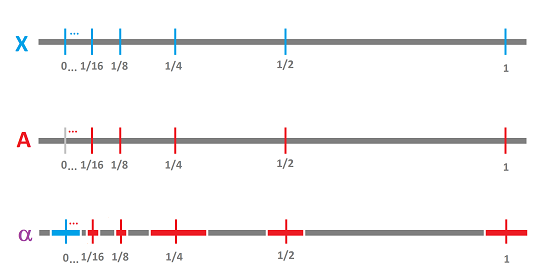 The crucial step is the ability to choose a finite subcover. This motivates the following definition:

Definition. A topological space $X$ is called compact if every open cover contains a finite subcover.

We can now continue with the general argument and prove the following important theorem.

Theorem (Bolzano-Weierstrass Theorem). In a compact space, every infinite subset has an accumulation point.

The following version of the Bolzano-Weierstrass Theorem is also very important.

Corollary. In a compact space, every sequence has a convergent subsequence.

Exercise. Prove the corollary for (a) metric spaces, and (b) all topological spaces. Hint: think of the sequence as a subset $A$ and consider two cases: $A$ is infinite and $A$ is finite.

There are two approaches to compactness:

Exercise. Provide a definition of compactness in terms of closed sets.

Alternatively, we define compactness of subsets.

Definition. For any subset $X$ of a topological space $Y$, a collection $\alpha$ of open (in $Y$) sets is called an open cover if $X \subset \cup \alpha$. Then, $X$ is called a compact subset if every open cover has a finite subcover.

These definitions are equivalent in the following sense:

Proposition. If $X$ is a compact subset of space $Y$, then $X$ is compact, in relative topology. 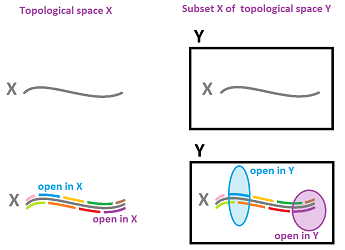 The nature of the first definition -- given entirely in terms of open sets -- tells us that compactness is a topological invariant: it is preserved by homeomorphisms. Moreover, the image of a compact space under a continuous function is compact.

Theorem. Compactness is preserved by continuous functions: if $f:X\to Y$ is a map and $X$ is compact then $f(X)$ is also compact.

The proof is illustrated below: 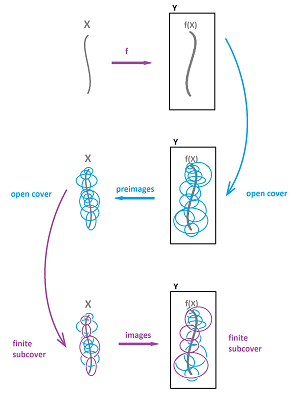 Proposition. (1) All finite topological spaces are finite. (2) Anti-discrete is a compact topology.

The following result significantly simplifies the task of proving compactness.

Theorem. Suppose $X$ is a topological space. Then $X$ is compact if and only if there is a basis $\beta$ of its topology so that every cover of $X$ by members of $\beta$ has a finite subcover.

We would like to apply the idea of compactness and our results we have proven to calculus and, especially, the Extreme Value Theorem. For that, we need to take a good look at intervals.

First, the real line ${\bf R}=(-\infty,\infty)$ is not compact: it suffices to consider the cover by all intervals of a given length, $\epsilon$.

However, the following cover of $(a,b)$ (an expanding sequence of intervals) does not have a finite subcover:

But closed intervals are! Why is this important?

We already know that the image of an interval under a continuous function is an interval.

In turn, it implies that the sup-norm is well-defined.

Proof. The proof is by contradiction. Suppose we are given an open cover $\alpha$ of $[a,b]$ that doesn't have a finite subcover. The idea of the proof is that since $[a,b]$ is “bad”, then so is one of its halves, and a half of that half too, etc., until only a single point is left, which can't be “bad”: 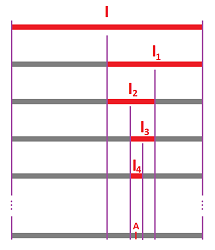 We start with the following two observations:

These two facts allow us to construct the sequence inductively.

Exercise. What tacit assumption about $U$ did we make? Fix the proof. 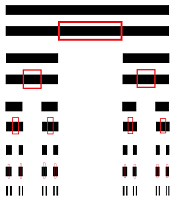 A generalization of the Heine-Borel Theorem is as follows.

Theorem. A closed bounded subset of a Euclidean space is compact.

It also follows that all cells are compact!

Exercise. Show that even though the combination of closedness and boundedness (of a subset of a Euclidean space) is a topological property, neither of the two alone is.

Before we address the general case, let's consider rectangles in the plane. Can we generalize the proof in the last subsection? The picture below suggests that we can: 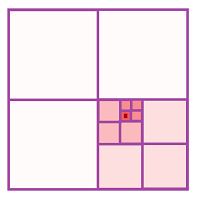 Exercise. Prove that a closed rectangle in the plane is compact. Hint: Instead of nested intervals, consider nested rectangles.

Later, we will show that compactness is preserved under products. That will prove compactness of the closed squares, cubes,... , $n$-cubes. Then the above theorem easily follows if we can transition to subsets. Of course, not all subsets of a compact space are compact, but the closed ones are.

Theorem. A closed subset of a compact space is compact.

Proof. Suppose $Y$ is compact and $X \subset Y$ is closed. Suppose $\alpha$ is an open cover of $X$. We want to find a subcover of $\alpha$ using the compactness of $Y$. The only problem is that $\alpha$ doesn't cover the whole $Y$!

The first step can be carried out in a number of ways; however, we need to make sure that step 3 gives us a collection that still covers $X$. This outcome is impossible to ensure unless we choose to add only the elements that don't intersect $X$. With that idea, the choice is easy: we need only one set and it's the complement of $X$. This set is open because $X$ is closed. So $$\beta := \alpha \cup \{Y \setminus X \}.$$ Since $Y$ is compact, $\beta$ has a finite subcover, $\beta'$. Finally, we choose: $$\alpha' := \beta' \setminus \{Y \setminus X \}.$$ $\blacksquare$

The proof is illustrated below: 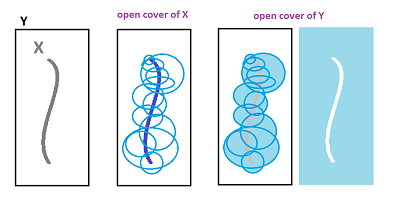 Then, any closed bounded subset is a subset of a closed cube in ${\bf R}^n$ and, therefore, is compact.

This isn't true for infinite dimensional spaces. As a counterexample, we consider a closed ball in the space of functions with sup-norm: 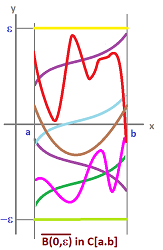 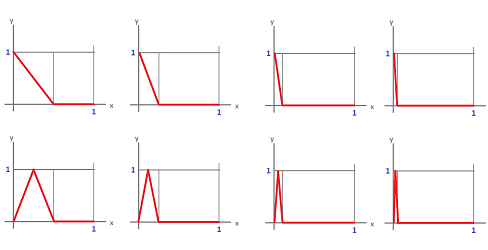 Exercise. Provide formulas for the functions. Show that the first sequence diverges and the second converges, point-wise. However the distance to the limit, the zero function, remains the same. Conclude that there is no uniform convergence and that $\bar{B}(0,\epsilon)$ isn't compact in $C[a,b]$. What about $C_p[a,b]$?

Exercise. Suppose $X$ is a compact space. Define the analogs $C(X)$ and $C_p(X)$ of the spaces of real-valued continuous functions $C[a,b]$ and $C_p[a,b]$ and examine the issue of compactness.

Definition. A space is called locally compact if its every point has a neighborhood the closure of which is compact.

Exercise. Is either discrete or anti-discrete topology locally compact?

Proposition. $C[a,b]$ is not locally compact.