In the presence of noise one has to take into account robustness of topology. The measurement for this robustness is called persistence. Persistent Betti numbers are ranks of the persistent homology groups. 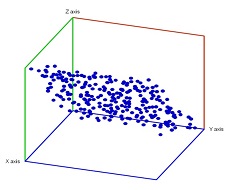 In the above barcodes, there is one feature in dimension 0 that has a much longer lifespan than other dimension 0 features. In dimension 1, no single feature persists significantly.