Everything starts with this main theorem:

Proof. The idea of the proof is to "lift" the loops in the circle to the ones in the real line: 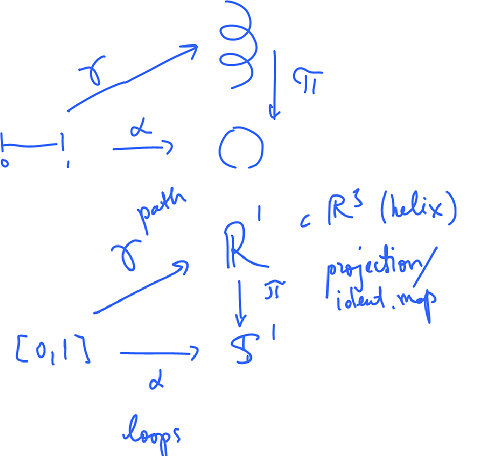 Here, if one thinks of the circle as a subset of the complex plane, the projection is given by $\pi (x)=e^{2\pi ix}$. 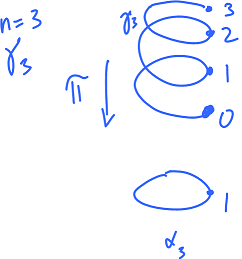 Now, how do we construct $\gamma$ from an arbitrary $\alpha$ so that $\pi\gamma=\alpha$? Piece by piece.

So, we start with an open cover of the circle of, say, two elements: 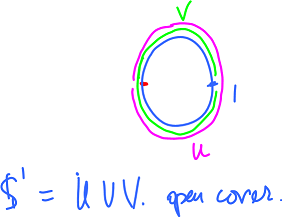 We now lift it. 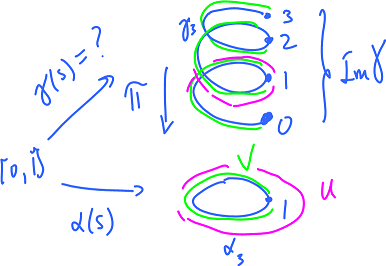 The surjectivity of $\phi$ follows from the following lemma.

We use Lebesgue Lemma: 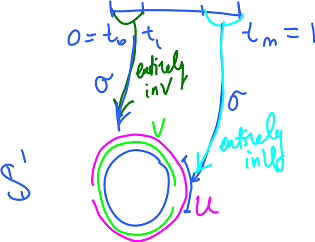 Note: We will reuse this fact later. 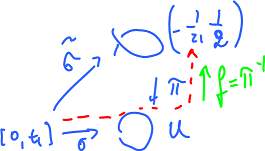 We continue with induction on $i$: suppose we constructed $\tilde{\sigma}$ with

Either way, it's a homeomorphism. Then define: $$\tilde{\sigma}=f\sigma.$$ Verify the four properties for this function (Exercise). $\blacksquare$

Proof. Similar to the previous: 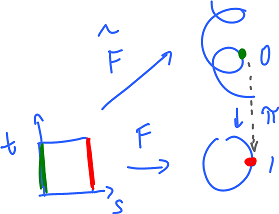 based on the Lebesgue Lemma, for the square. $\blacksquare$

We use this lemma to show that the homomorphism $\phi$ is one-to-one. It's equivalent to showing that its kernel is $0$.

For a similar analysis in dimension $n$, see homotopy groups. The fundamental group is the first homotopy group, which is why the notation $\pi _1$ is used.

Based maps generate homomorphism of the fundamental groups: 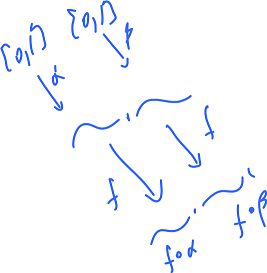 Compare to homology in dimension 1.

The following are examples of maps from the circle to annulus and what they generate of the fundamental groups: 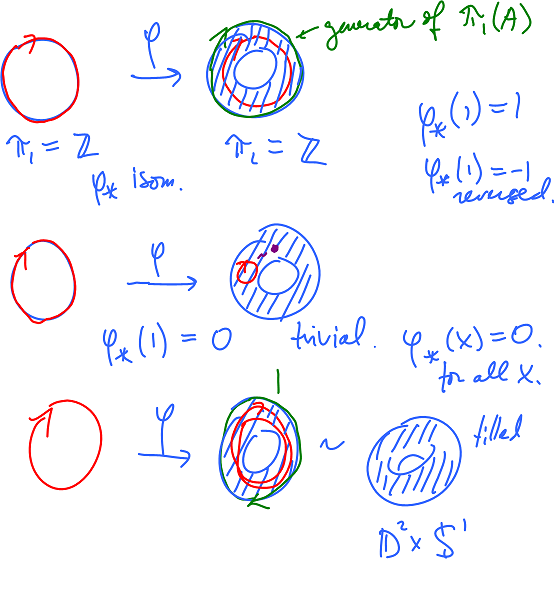 This leads to the concept of the degree of a map.

Proof. Suppose the base points are $a\in X,b\in Y$. Then select the base point $(a,b)\in X\times Y$. The proof is based on the use of the homomorphisms $p_{X*},p_{Y*}$ generated on the fundamental groups of these spaces by the projections $p_{X},p_{Y}$:

It is one-to-one. Exercise. $\blacksquare$

What if they aren't based?

The basepoints in the same path-component of the space will give isomorphic groups.

Exercise. Provide the details of the proof.

In particular, this means that the fundamental group of a (non-empty) path-connected space is well-defined, up to isomorphism, without the need to specify a basepoint.

and in the right0hadn side:

Why are they equal? 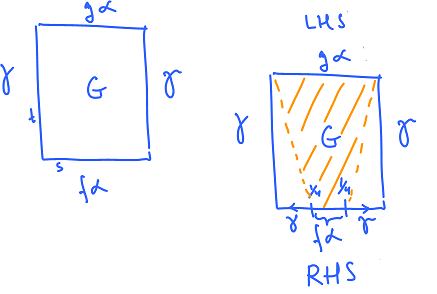