The need for new science

Image analysis is used in attempt to extract meaningful information from digital images. With the ubiquity of digital cameras, the number of industries that need this technology is growing at a tremendous pace. Indeed, wherever a person is using his eyes to count or measure, the computer may be able to do a better job.

The science of computer vision relies an abundance of image analysis methods. These methods have been developed over the years in order to help solving various but often narrow image analysis tasks. The result is that these methods are very image and task specific and can never be applied to a broad range of applications.

Our conclusion is then that as a discipline computer vision lacks a solid mathematical foundation.

Our goal is to design a comprehensive computer vision system “from first principles”. These principles come initially from one of the most central areas of mathematics, topology. The idea is that just as mathematics rests on topology (and algebra), computer vision should be built on a firm topological foundation. More...

Pixcavator’s image analysis methods are based on a rock solid mathematics. This mathematics has been developed in the last 100 years but only recently its methods became useful in practical applications. This breakthrough was made possible by Dr. Peter Saveliev's research in computer vision and image analysis.

The underlying idea is very simple. The "objects" captured by the software are connected clusters of darker pixels surrounded by lighter background, or vice versa. For example, in the image below, the gray cells are captured as "objects" because they are surrounded by black pixels. 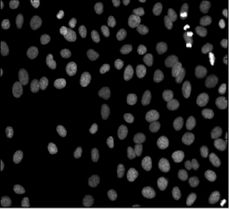 Once these objects are captured, their sizes are measured, their locations are found, and their shapes are evaluated. The results are presented to the user.

The software is backed up by a thorough exposition of the science and and algorithms in this wiki, that contains over 800 articles with 2000 illustrations. If you would like to see the formal academic publications, follow this link: Pixcavator's references.

Pixcavator provides unparalleled speed and flexibility in developing new software in a variety of fields:

The tools that make this possible is Pixcavator SDK – Software Developer’s Kit.