Where do differential forms come from?

In other words, the integral is simply a special kind of "parentheses" for function $f$, like this: $$G(f).$$ This approach is understandable as the Riemann integral is the limit of the Riemann sums of $f$. However, it's advantageous to look at this integral as $$\int_I\color{maroon}{f(x)dx}.$$ Then we can rewrite this as $$\int_I\color{maroon}{ω},$$ where $ω = f(x)dx$ is a differential form (of degree 1). The point is that the integral is now a function that is evaluated at ω, like this: $$H(ω) = \int_I ω.$$ 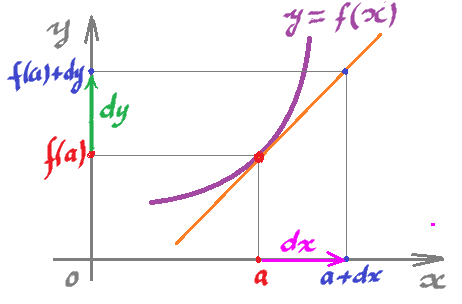 When we solve a differential equation by "separation of variables", we are also using $1$-forms.

This approach produces one of the most beautiful formulas in the whole mathematics, the Stokes theorem: $$\int_ σ dω = \int_{∂σ} ω.$$ Here $σ$ is a cell (or more generally a chain) and $∂σ$ is its boundary.

Stokes theorem is a generalization of the Fundamental Theorem of Calculus. Indeed, it suffices to substitute this:

Differential forms also form a cochain complex which leads to a study of the topology of the underlying space via cohomology.