Graphs and their realizations

Here we take our first step toward algebraic topology.

We will concentrate initially on only discrete structures, such as graphs. The reason why has become clear from our attempts to answer some obvious topological questions about specific spaces. Given a subset of the Euclidean space:

Even though there are a few theorems that we can use as shortcuts, we have no algebraic means for solving these problems computationally, nor for computing the number of path-components or the number of holes.

In the rest of the chapter we will:

The very first data structure that needs to be analyzed topologically is graphs:

The examples of graphs shown come as networks of bridges, atoms in a molecule, related individuals, or computers.

We don't allow distinct edges for the same pair of nodes, nor doubles, such as $AA$, and we assume that $AB=BA$.

Example. In the example of a field of flowers, each type is represented by a node of a graph and the overlapping areas by its edges:

Let us be clear from the beginning that the dataset given above is the whole graph and what's below is just an illustration:

To draw an illustration, we first put the nodes in a more or less circular arrangement and then add the corresponding edges.

One can also think of a graph as just a collection of points in space, also called “vertices”, or “nodes” connected by paths, called “edges”. Thus, a graph is made of finitely many pieces that are known to be path-connected! One can then study the topology of such sets by means of graphs represented as discrete structures:

Definition. A realization $|G|$ of graph $G$ is a subset of the Euclidean space that is the union of the following two subsets of the space:

The definition is justified by the following.

Of course, there may be many different realizations of the same graph.

Exercise. Provide an explicit realization of a graph with $4$ nodes in ${\bf R}^3$. Hint: start with two nodes.

Now we provide discrete analogs of our topological definitions.

We start with the discrete analog of the most basic topological property.

We now connect this new concept to its origin.

Theorem. A graph $G$ is edge-connected if and only if its realization $|G|$ is path-connected.

Exercise. Provide a formula for the path in the first part of the proof and prove that it is continuous.

Exercise. Show that, in the second part of the proof, the list $L$ may indeed be infinite. Also prove that, after removing repetitions, $L$ becomes finite.

Just as before, in order to evaluate the topology of the graph, we make a transition to homology.

Theorem. Homology is an equivalence relation on the set of nodes of the graph.

Theorem. For any graph $G$,

The problem is solved: we have expressed the topological property entirely in terms of data and now the computer can do this job.

In the last section, we studied holes and tunnels in objects by capturing them with $1$-cycles. Then, in order to deal with the unavoidable redundancy, we declared $1$-cycles homologous and, therefore, indistinguishable, if they form the boundary of some surface. However, as there is no meaningful way to fit a surface into a graph, homology won't be useful or necessary.

Is there still redundancy? Yes, but of a different kind. The realization of graph $G$ below is the figure eight and it appears to have $2$ holes. However, the graph itself has (at least) $3$ cycles, $a,b,c$!

How do we remove the redundancy? The observation is algebraic: $$a+b=c.$$ In other words, the cycles are linearly dependent! That's why $c$ doesn't count.

This brings us to the general idea:

It is time now to start to recognize the need for algebra in topology.

We might try something familiar first in order to turn nodes and edges into algebraic entities, such as the union. Unfortunately, the algebra of unions is inadequate as there is no appropriate meaning for subtraction: sometimes $(A\cup B) \setminus B \ne A$. The algebra that does work is familiar.

This idea takes us deep into algebra. One unexpected conclusion is that

Note: If we choose to stay within the realm of linear algebra, we have to either think of $Z_1$ as a vector space with coefficients over ${\bf Z}_2$ or to enlarge $Z_1$ by including all of its real-valued linear combinations: $ra+sb,\ \forall r,s \in {\bf R}$. Then $\{a,b \}$ is a basis of this vector space and the idea becomes:

However, in order to retain the cancellation property, we would have to deal with the complexity of directed edges, with $AB \ne BA$. We will postpone this option until later.

In either case, there is redundancy: many nodes per component and many cycles per hole. To resolve the redundancy, we did the following:

These are two very different solutions to two similar problems. In our study of dimension $2$ (e.g., surfaces) and above, we'll need to use a combination of these two techniques.

The topological significance of this number is revealed if we consider a simple, i.e., without self-intersections, curve $C$. It might be a realization of various graphs $G$, but let's suppose $G$ is a sequence of $n$ consecutive edges:

Then $$\chi (G) = n-(n-1)=1.$$ So, the number is independent from $n$! Therefore, $\chi (G)$ could be an attribute, i.e., a “characteristic”, of the curve itself that distinguishes it from curves that do have self-intersections. To justify this conclusion, however, we need the following.

Theorem. If a simple path is a realization of a graph, this graph is a sequence of $n\ge 1$ consecutive edges.

Proof. Idea: Remove an edge then use induction.

So, we use induction on the number of edges on the graph.

What kind of graph is it?

Exercise. Find and fix the two gaps in the proof. Hint: First prove that removing an edge can't create cycles.

Exercise. Repeat the proof of the theorem for $e$ an “end-edge”.

Exercise. What about the converse?

Exercise. Prove the following generalization of the above theorem.

What is a hole in the graph? The question isn't as simple as it appears. Let's investigate.

First, a tree has no holes! At the same time, it has no cycles. This looks like a match. Maybe holes are cycles?

In general, we can't say what a hole is. Even though we now know how to count holes -- as the number of linearly independent cycles -- we can't point at one of the cycles and say “That's a hole and that one isn't”. The example below shows that which of the cycles “naturally” look like holes depends on the realization of the graph:

This ambiguity is caused by our topological point of view; we are allowed to bend stretch etc., and the results have to hold. But this ambiguity is, in fact, a good news because it is fully matched by the ambiguity of the algebra. Indeed, if $Z_1=\{0,a,b,c=a+b\}$, then

(In the language of linear algebra, these are two bases of this vector space.)

We still would like to confirm our intuition about what holes in a graph are. For that, we will limit our attention to a simpler kind -- planar graphs. Those are the graphs that can be realized in the plane:

The idea is, once a realization $|G|$ of planar graph $G$ is chosen, the holes become visible as path-components of the complement of $|G|$.

We rely on the following two theorems (for the proof of the first see Munkres, Topology A First Course, p. 374).

Theorem (Jordan Curve Theorem). The complement of a simple closed curve in the plane has two path-components (one bounded and one unbounded).

Theorem. If a simple closed curve is a realization of a graph, then this graph is a cycle of $n\ge 1$ consecutive edges.

Exercise. Prove the last theorem. Hint: Try to answer these questions about $G$: how many components? cycles? holes? forks? end-points?

So, we have a one-to-one correspondence between:

Let's count holes in this environment.

Suppose we are given a connected planar graph $G$ with a specific realization $|G|$ in the plane. The idea is to remove some edges one by one until we have a tree.

Exercise. Prove that after every step the new graph is connected.

Proof. Above, we have shown that the graph with $n$ holes will need $n$ edges removed to turn it into a tree. Then the last theorem applies. $\blacksquare$

Example (houses and wells). Suppose we have three houses and three wells arranged as below. All three wells are public but, since the house-owners don't get along, they want to make paths from their houses to the wells that don't intersect. The first attempt fails -- there is no way to find a path from the third house to the second well:

Let's prove that this is indeed impossible. The graph has $6$ nodes and $9$ edges, therefore, by the formula above, there must be $4$ holes in this planar graph. However, the way the paths have to be arranged, each hole, and the outside area too, has to be bounded by at least $4$ edges. This makes it necessary to have $20$ edges, with some repetitions. How many? Each edge is shared by exactly two holes, counting the outside area. Therefore, there must be at least $10$ edges, a contradiction.

Exercise. Can we rearrange the houses and wells so that the paths can be found?

Exercise. Can this problem be solved on a sphere, a cylinder, a torus? Suggest others.

An important way to rephrase the last theorem is the following.

While useful, this non-algebraic approach is a poor-man's solution of this problem.

We have demonstrated that the Euler characteristic of a graph $G$, $$\chi (G) =\# \text{ of nodes} -\# \text{ of edges },$$ captures enough topology of $G$ so that we can tell trees from non-trees. We have also noticed that it is the minus sign in the formula that ensures that this number is preserved when we add or remove “topologically irrelevant” edges.

A pattern was originally noticed by observing a lot polyhedra:

The formula will prove to be useful, even though convexity isn't a topological property.

We will consider two proofs. The first one will use a result from the last subsection about planar graphs.

We start by observing that the collection of vertices (nodes) and edges of polyhedron $P$ is always a realization of some graph $G_P$, but is it planar? It is, under an appropriate choice of stereographic projection: 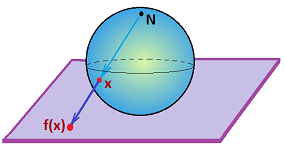 However, it is easier to see such a realization as it appears on the sphere ${\bf S}^2$ -- via the radial projection -- demonstrated on this cube:

Unfortunately, this proof relies on the convexity of the polyhedron. Meanwhile, we observe that it might take the same number of vertices, edges, and faces to either

While the former object is convex, the latter isn't! This suggests that the Euler characteristic has nothing to do with convexity and may depend only on the topology of the polyhedron.

An alternative approach to the proof of the formula is outlined below.

We assume that $P$ is a polyhedron that satisfies these topological properties:

The idea of the proof is to build two trees on $P$ with the following properties:

of $P$. And the theorem follows.

We just need to build $T$ and $G$ satisfying these conditions.

Exercise. Prove that every graph has a subgraph which

We apply this result to the graph of $P$. Then, we have its subgraph $T$ which is a tree and 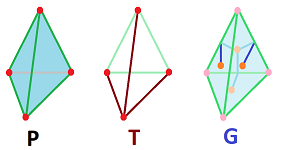 Exercise. It is always possible to get from one face to any adjacent face without crossing $T$. Why?