From graphs to simplicial complexes

A graph is pure data. It consists of two sets:

The topology is hidden in the data and, in order to see it, we often have to illustrate the data by a subset of the Euclidean space, as follows. Each node is plotted as a distinct point, but otherwise arbitrarily, and these points are connected by simple curves (paths) that can have only the nodes in common:

This set is called a realization of the graph, which is no more than an illustration of the data.

Now, with a graph on the left, what could be the meaning of the data behind the picture on the right?

There must be some new kind of relation present! This three-way relation exists for $A,B,C$ but not for $A,C,D$.

We now have a collection $K$ of three sets:

Exercise. Create a similar table for yourself and four of your best friends documenting your joint activities. Create a simplicial complex.

Example (database). A similar construction is possible for any “relational database”, which is simply a table:

For a single column table, every collection of $n$ agents that happen to have an identical attribute form an element of our simplicial complex, an $(n-1)$-simplex. $\square$

Definition. Suppose a (possibly infinite) set $S$ is given. A collection $K$ of subsets, called simplices, of $S$ is called a simplicial complex if (1) any subset of any simplex is also a simplex: $$\tau \in K, \sigma \subset \tau \Longrightarrow \sigma \in K,$$ and (2) every simplex is a subset of only finitely many simplices. If simplex $a$ has exactly $n+1$ elements, it is called an $n$-simplex, or simplex of dimension $n=\dim a$. The highest dimension of a simplex in $K$ is called the dimension of $K$: $$\dim K:= \displaystyle \max _{a\in K} \dim a.$$

Here is an example of a “realization” of a $2$-dimensional simplicial complex as a metric complex in ${\bf R}^3$:

And here is a complex that may seem to contain only one $3$-simplex, blown up: 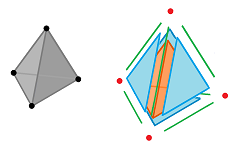 Example. A realization of the complex $$K=\{ABD, BCD, ACD, ABE, BCE, ACE\}$$ is found by gluing these $6$ “triangles” to each other. Or we can start by listing the lower-dimensional cells:

Then we build a realizaiton of $K$ dimension by dimension:

We throw the vertices (the singletons from $K$) around in ${\bf R}^3$ and then connect them by the paths (the pairs in $K$) trying to keep them unknotted for simplicity. Finally, we add the faces (the triples in $K$) as pieces of fabric stretched on these wire-frames.

The result is homeomorphic to the sphere. $\square$

Exercise. (a) Demonstrate that a relational database with a single attribute produces a simplicial complex as described above. (b) Give an example how simplices (and a simplicial complex) can be formed without requiring the attributes to be identical. (c) How is a complex formed if there are more than one attribute?

The boundary of a $n$-simplex is made of its $(n-1)$-faces. Those are easy to construct by choosing one vertex at a time and considering the opposite face:

How to orient a simplex

The first step in developing the homology over the reals is to add more structure to the complex -- orientation of cells.

Recall that for cubical complexes we initially defined the orientation for $1$-cells only as their directions. It can be arbitrary or it can be aligned with the axes: 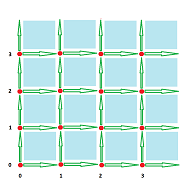 These directions, however, don't suggest any particular way of orienting the squares. Instead, it is defined as clockwise or counterclockwise orderings of the vertices. This approach, however, proved itself too complex for higher dimensions and we instead relied on the representation of each cube as a product of edges and vertices.

Defining such orientation is also possible based the geometry of the Euclidean space; for example, a plane (and a square) in the $3$-dimensional space is oriented by a choice of one of the two unit normal vectors. 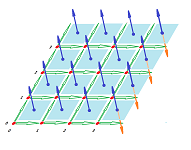 Exercise. Show that this is the choice between two equivalence classes of normal vectors.

The idea extends to subspaces of dimension $n-1$ in ${\bf R}^n$. Regrettably, this “external” approach to orientation fails when the dimension of the subspace is less than $n-1$ because the normal vectors don't split into two equivalence classes anymore.

The most important thing we know is that

there should always be exactly two orientations.

Following our treatment of cubical complexes, we first define the directions of all edges of our simplicial complex and, this time, the direction of an edge isn't dictated by the ambient space (there is none) -- the choice is entirely ours!

We illustrate this idea below. In this simplicial complex representation (triangulation) of the circle, all three edges have been oriented, at random:

Early on, let's make it clear that another choice of cells' orientations will produce different but isomorphic groups of chains. In fact, choosing an orientation of a complex is just a special case of choosing a basis of a vector space.

Next, after using directions to define orientation of edges, how do we handle orientations of higher-dimensional simplices?

As there is no such thing as “the direction of a triangle”, we need to think of something else. Looking at the picture below, the answer seems obvious: we go around it either clockwise or counterclockwise:

Unfortunately, this idea has no analog for a $3$-simplex. There is no such thing as a “clockwise path” in a cube. In fact, there is no circular path through all of its vertices that capture all possible orderings.

First, let's observe that speaking of edge $AB$ being an element of complex $K$ is misleading because the elements of $K$ are subsets of set $S$. Therefore, to be precise we wouldn't write: $$AB \in K,$$ until the orientation has been already introduced, but instead: $$\{A,B\}\in K.$$ Considering the fact that these are equal, $\{A,B\}=\{B,A\}$, as sets, here's our conclusion: choosing $AB$ over $BA$ is equivalent to choosing an ordering of the set $\{A,B\}$.

So, the idea is that an orientation of a simplex is simply a specific choice of order of its vertices.

Let's consider the triangle. For a $2$-simplex with vertices $A,B,C$, we have $6$ possible orderings of the vertices:

But there should be only two orientations! It follows then that an orientation should be a choice of one of these two classes of orderings. What are they exactly? They are simply “reorderings” of $ABC$, i.e., self-bijections of $\{A,B,C\}$. We recognize them as permutations.

Recall, an even/odd permutation is the composition of an even/odd number of transpositions, elementary permutations that “flips” exactly two elements. For example,

Exercise. Prove the above statement.

So, the definition of orientation of simplices is based on the fact that there are two equivalence classes of orderings of any set and, in particular, on the set of vertices of a simplex:

two orderings are equivalent if they differ by an even permutation.

Therefore, we will always have to deal with this ambiguity in all our constructions as each ordering that we use is, in fact, an equivalence class of orderings. For example,

The good news is, it suffices to list a single representative of the class to orient the simplex.

The algebra of oriented chains

Definition. Suppose a simplicial complex $K$ consists of simplices as subsets of set $S$. We say that $K$ is an oriented simplicial complex if its every simplex is oriented. (We will omit “oriented” when there can be no confusion.)

Note that the orientations of the edges of $\tau$ don't match the orientation of $\tau$ itself. The reason is, they don't have to... We shouldn't expect such a requirement because there may be another $2$-simplex adjacent to one of these edges with the opposite orientation. $\square$

To acquire an orientation for complex $K$, one can just order its vertices and then use that order to orient each simplex in $K$:

Exercise. In how many ways can this be done?

Up to this point, the development of the algebra of chains follows the same path as in the case of oriented cubical complexes. Let's point out some differences. First, all simplices have to be supplied with orientations not just $1$-dimensional ones. Second, the meaning of $-\tau$ for a simplex $\tau$ is clear: it's $\tau$ with the opposite orientation. For dimensions $1$ and $2$, the explicit meaning is also clear: 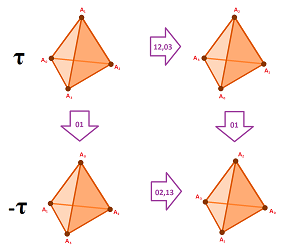 It is worth repeating what oriented simplices are and aren't.

This is how we make it precise.

Recall that the point of using oriented chains is to be able to capture all possible ways to go around the circle: going once, twice, or thrice around it, or going in the opposite direction.

An oriented simplicial chain is a “formal” linear combination of finitely many oriented simplices, such as $3a + 5b - 17c$. The coefficients come from some ring $R$. From this point of view, the chains previously discussed are over $R={\bf Z}_2$, i.e., binary. We will concentrate on real chains, i.e., ones with real coefficients. Nonetheless, the analysis will, with just a few exceptions, apply also to the integers $R={\bf Z}$, rational numbers $R={\bf Q}$, etc.

Theorem. $C_k(K)$ is an abelian group with respect to chain addition.

Proof. We verify the axioms of group below.

Example. In particular, in the example of a triangle representing the circle, we have

Exercise. Prove that choosing a different orientation of a simplicial complex produces a chain group isomorphic to the original. Present the matrix of the isomorphism.

Exercise. What does the algebra of oriented chains over ${\bf Z}_2$ look like?

Until some connection is established between chains of different dimensions, this algebra has nothing to say about the topology of the complex. This connection is given by the boundary operator.

The boundary operator of a simplicial complex records the relations between cells/chains of consecutive dimensions.

Let's review what we already know.

Example. Suppose we have a simplicial complex $K$ of the solid triangle seen before:

Let's define the boundary of a simplex of an arbitrary dimension.

The idea is very simple: removing an item from an ordering gives an ordering of the smaller set, just as shown above. Yet, to see that this answer is justified isn't as simple as it seems. Indeed, we aren't dealing with orderings but with classes of orderings. Does this operation make sense?

Example. Let's apply the definition to the complex of the triangle, as in the last example. These are the oriented simplices based on the obvious ordering of the $3$ vertices:

A single term in the boundary formula for a $2$-simplex is shown below: 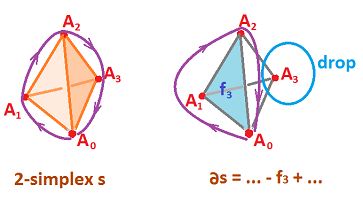 Theorem. The boundary chain of an ordered simplex is well-defined. In particular, for any oriented simplex $s$, we have $$\partial (-s)= -\partial (s).$$

Exercise. Provide the rest of the proof.

Exercise. Fill the blanks in the table to demonstrate how the signs alternate.

The diagram below illustrates the proof for $n=2$: 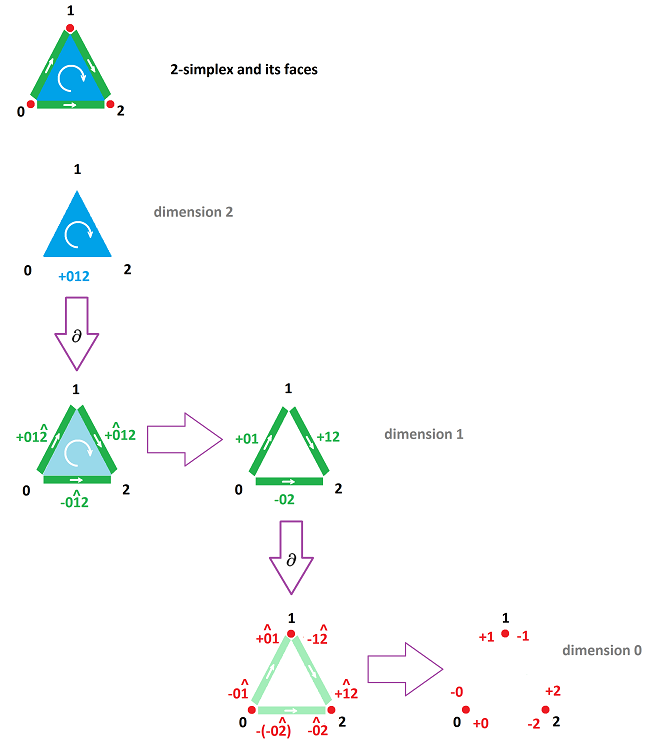 Corollary. The theorem holds for chains over ${\bf Z}_2$.

Exercise. Prove the corollary (a) by rewriting the above proof, (b) directly from the theorem. Hint: think of an appropriate function ${\bf Z}\to {\bf Z}_2$.