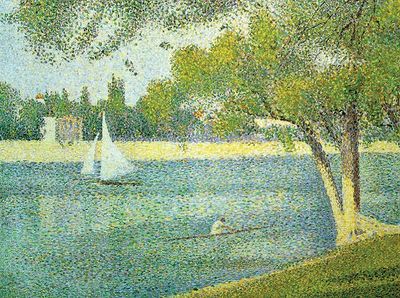 From a recent article in the Notices of the AMS "What is persistent homology?" by Shmuel Weinberger: " Consider the art of Seurat or a piece of old newsprint. The eye, or the brain, performs the marvelous task of taking the sense data of individual points and assembling them into a coherent image of a continuum — it infers the continuous from the discrete."

The articles goes on to explain how topologists have learned to deal with noise and uncertainty of real life images and data. The tool is called persistent homology. The article explains some of the mathematics but not how exactly this approach applies to the painting.

I'll try to analyze this image with Pixcavator.

First, I had to choose a color channel. The reason is that true color analysis is still impractical (also multiparameter persistence isn't well understood).

Whatever the channel is, the result is a gray scale image. In this case,

I decided to concentrate on contrast only and see how far using only topological tools can take us. Not far.

In the first experiment, I chose "Blue". Then I allowed myself to move only the "contrast" slider and tried to isolate the sail with least amount of noise left. The first image below is the result. A lot of small specs all around. Moving the slider further to the right would merge the sail with the background. Now, if you are allowed to filter out objects based on their sizes, the result is much better, second image. Much less noise and, in addition to the sail, the leaves and the shore line are captured too. 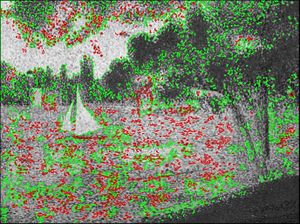 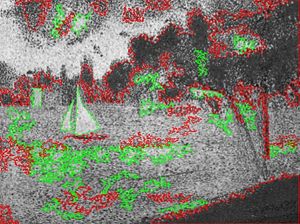 In the second experiment, I chose "Green". Once again, I allowed myself to move only the "contrast" slider and tried to isolate the rower in the rowing boat, with least amount of noise left. Same story. 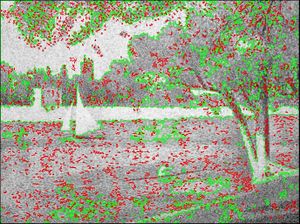 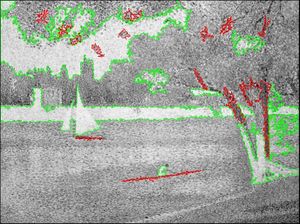 The results aren't surprising at all. One sees similar results as salt-and-pepper noise, which is common in imaging, will have high contrast.

So, the bottom line is you can't rely entirely on contrast/persistence and ignore geometry.