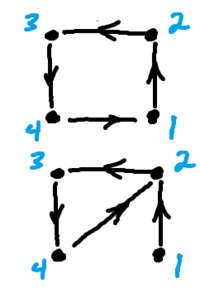 Suppose we have a circular directed graph as in the picture on the right. From the symmetry it follows that the page ranks of all the nodes should be equal. Since the PageRanks should add up to $1$, it follows that $$P_i=1/4,i=1,2,3,4.$$

The role of outlinks

They can improve your PageRank!

To experiment with ideas like this I've created this little spreadsheet. The formula comes from the original Page/Brin paper from 1998.

Suppose we have these ten "pages": A, B, ..., J. They are listed in the table as both rows and columns. The links are the entries in the table. 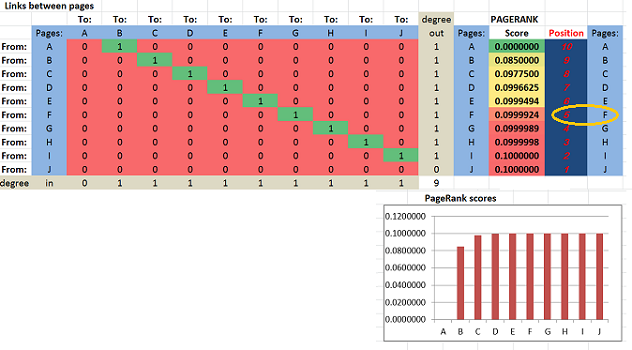 The PageRank scores, as well as the positions, of the pages are computed and displayed on the right. The scores for A, ..., J are increasing in the obvious way: from 0 to .1. In particular, F is #5.

Next, suppose F adds a link to A: F → A. You can see that 1 has appeared in the first column of the table: 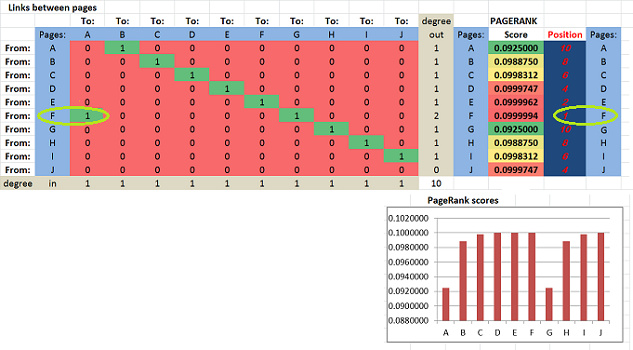 Yes, adding an outbound link has brought this page from #5 to #1.

The result certainly goes against our intuition. It shouldn't be surprising though considering other problems with the math of PageRank.

This isn’t a new discovery of course. These are just a couple of references for you:

The conclusion is that the appearance of a cycle is what seems to be the reason for this behavior...

You won't get a straight answer from Google on this. When asked to explain what PageRank is, they say it’s hardly a secret and refer you to the 1998 paper (or rehash its contents like here). However, if you criticize those ideas, the answer is: it's irrelevant because PageRank isn’t that anymore, it is now composed of 200 various "signals". So, what's PageRank anyway? Glad you asked, it's all explained in that famous paper from 1998...