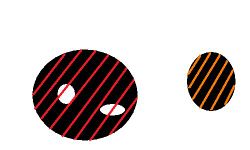 Objects are connected black regions surrounded by white background with white holes in them.

The area, or size (in 2D), of an object includes the holes (in other words, the area of the hole is not subtracted).

The decision to exclude the holes was primarily based on programming convenience:

It is also justified by the idea that object's size is supposed to measure its importance (in order to filter out noise). If we have a thin curve that encircles a large region, it is the area of the region that truly reflects the importance of the curve (unlikely to be noise). Secondly, once all objects are found, the holes are found too as light objects. So, it's not hard to evaluate the area that does not include the holes. In fact, this approach has the advantage of being able to ignore the holes that are too small.

The perimeter can be easily computed by traversing around the object. Both the area and the perimeter can also be computed indirectly during merging and splitting as one moves through the frames building the topology graph. For more see Measuring objects.

The inclusion relation between objects and their holes (and vice versa) is recorded in the topology graph. This is the main step of image analysis algorithm of Pixcavator. To experiment with the concepts, download the free Pixcavator Student Edition.

More precisely these concepts (such as 0- and 1-cycles) are defined elsewhere.

In the mathematical literature connected components is used instead.