Any study of topology would be incomplete without considering continuous transformations of objects, also known as maps.

Below, we sketch a few simple examples of maps. One should notice that simply comparing the number of topological features, i.e., components and holes, in the domain and the target spaces doesn't reveal the complete picture. Instead, we want to track each of these features and record what map does to it.

Exercise. We “split” the hole here, why don't we split a component?

In order to be able to employ the algebraic machinery we've started to develop, we would like to match these transformations with their discrete counterparts, as functions of graphs: $$f:G\to J,$$ and then make sure that these functions reproduce these “topological events”.

To sort this out, we start with just the nodes.

Then, of course, these functions generate point-by-point functions on the realizations of these graphs and those functions demonstrate the topological behavior depicted above.

Next, we need to understand what may happen to an edge under such a “discrete” function.

It is natural to initially assume that the edges should be taken to edges, by means of a certain function: $$f_E:E_G \to E_J.$$ Such an assumption doesn't seem to cause any problems; in fact, it matches our basic interpretation of graphs as combinations of “agents” and the relations between them. Indeed, we map an agent to an agent and a relation to a relation.

Finding a specific discrete representation, or a counterpart, of a given continuous transformation may require approximation and even refining the graph:

This issue is discussed at a later time and for now we will be satisfied with an analogy.

We still don't have a valid discrete counterpart of a continuous function.

The first two options make sense because they preserve the relation between the agents. This is not the case for options 3 and 4! By looking at the graphs of these functions (on graphs), we realize that what we accept here is continuity:

and what we reject is the discontinuity:

Example. Let's start over with the assumption:

The only way to make sense of these is to define the value of the edge to be a node:

Then, we simply have two constant functions here.

What we have learned is that the values of the function on the nodes dictate the values on the edges, and vice versa.

Keeping in mind that we are after a discrete analogue of continuous functions, let's consider another example.

They are given by these functions:

Even a casual look at the graphs reveals the difference, which is the presence or absence of continuity. Indeed, these three graphs look like they could have come from a calculus textbook as illustrations of the issue of continuity vs discontinuity, at a point $x=B$, of a piece-wise defined function: $$\lim _{x\to B-} f(x) =f(B) =\lim _{x\to B+} f(x).$$

We need to ensure this kind of continuity. We plot the nodes first and then attach the edges to them. If this impossible, the function can't be continuous and should be discarded.

We require from the edge function $f_E$ the following:

But what about the collapsed edges? It's easy; we just require:

In the most abbreviated form, the discrete continuity condition is: $$f(AB)=f(A)f(B),$$ with the understanding that $XX=X$.

With this property assumed, we only need to provide $f_N$, and $f_E$ will be derived.

This idea also allows us to realize graph maps as continuous functions.

Exercise. Prove the continuity of $|f|$.

Below we illustrate these ideas for general graphs. Here are two "continuous" possibilities for a discrete function and one "discontinuous":

Exercise. Prove that the composition of two graph maps is a graph map.

Exercise. Under what circumstances is there the inverse of a graph map which is also a graph map?

We can now move on to algebra. 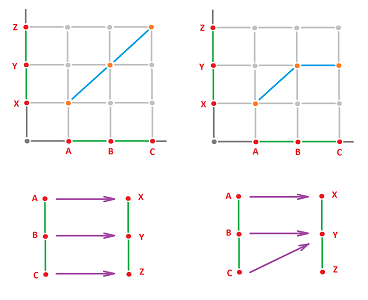 As always, it suffices to know the values of a function on the generators to recover the whole homomorphism. These two functions $f_N$ and $f_E$ generate two homomorphisms: $$f_0:C_0(G) \to C_0(J),\ f_1:C_1(G) \to C_1(J).$$ It follows that the first homomorphism is the identity and the second can be thought of as a projection.

Exercise. Find the matrices of $f_0,f_1$ in the last example.

Let's take another look at the “discrete continuity conditions” from the last subsection. No matter how compact these conditions are, one has to explain that the collapsed case appears to be an exception to the general case. To get around this inconvenience, let's find out what happens under $f$ to the boundary operator of the graph.

By design, these two homomorphisms satisfy the following.

Whenever the boundary operator can be properly defined, we can use this condition in any dimension and not just for graphs.

Exercise. Find the matrix of the chain map of a graph map that shifts by one edge a graph of $n$ edges arranged in (a) a string, (b) a circle.

Exercise. Find the matrix of the chain map of a graph map that folds in half a graph of $2n$ edges arranged in (a) a string, (b) a circle, (c) a figure eight; also (d) for a figure eight with $4n$ edges -- the other fold.

A wonderfully compact form of the above condition is below: $$\begin{array}{|c|} \hline \quad \partial f=f \partial \quad \\ \hline \end{array} $$ We will see this identity a lot later. An appropriate way to describe this is to say that the chain maps and the boundary operators commute. The idea is visualized with a “commutative diagram”.

This very fruitful approach is used throughout.

Compositions of functions can be illustrated as flowcharts:

The point illustrated by the diagram is that, starting with $x\in X$, you can

Diagrams like these are used to represent compositions of all kinds of functions: continuous functions, graph functions, homomorphisms, linear operators, and many more.

Again, go right then down, or go down then right, with the same result: $$gf = f'g'.$$ Both give you the diagonal function!

This identity is the reason why it makes sense to call such a diagram “commutative”. To put it differently, 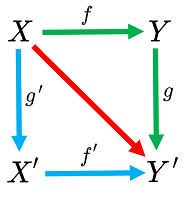 The image above explains how the blue and green threads are tied together in the beginning -- as we start with the same $x$ in the left upper corner -- and at the end -- where the output of these compositions in the right bottom corner turns out to be the same. It is as if the commutativity turns this combination of loose threads into a piece of fabric!

Exercise. Draw a commutative diagram for the composition of two chain maps.

Exercise. Restate in terms of commutative diagrams the last two theorems in the last subsection.

Cycles and boundaries under chain maps

Ultimately, our interest is to track the topological changes as one graph is mapped to another. Given a graph map $f:G\to J$, the main two questions are about the two topological features we have been studying:

However, these questions are imprecise.

As we know, the topological features are fully captured by the homology groups of these graphs and we can rephrase these questions as:

To answer these questions we need to conduct a further algebraic analysis of $f$.

Let's review. First, $f$ is a pair of functions:

These two generate the chain map $f_{\Delta}$ of $f$, which is a pair of homomorphisms:

These two commute with the boundary operator: $$f_0\partial=\partial f_1 .$$

Remember, zero is also a cycle...

Exercise. Carry out the “quick computation”.

Exercise. Modify the computations for another rotation and another collapse.

What can possibly go wrong here? 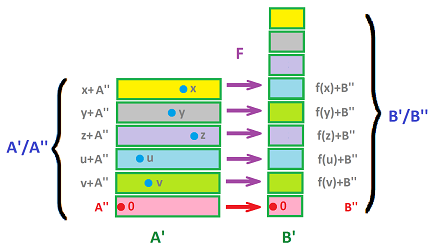 These are the equivalence classes:

The reflections do, but the rotations do not, unless the axis of rotation is the $z$-axis.

Exercise. What about the stretches?

As we examine the two requirements in the last subsection in our particular situation, we realize that for graphs we only need the latter: $$f_0(B_0(G)) \subset B_0(J).$$

Exercise. Find the matrices of the homology map of a graph map that folds in half a graph of $2n$ edges arranged in (a) a string, (b) a circle, (c) a figure eight.

Exercise. Devise a graph map that "splits a hole" and then conduct a homological analysis to confirm this.

The following three theorems give us the main features of homology theory. 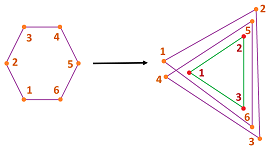 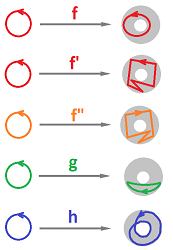 For these functions, the numbers of turns are: $1,1,-1,0,2$. However, homology theory as it has been so far developed produces results that fall short of our goal.

To be able to count the turns, we'd have to use directed edges and the integer arithmetic. This development is presented in the later chapters.

Exercise. Provide the missing details: compute the homology groups of the graphs, represent the depicted functions as realizations of graph maps, compute their homology maps, etc.