Let's recall the mechanical interpretation of a realization $|K|$ of a geometric complex $K$ of ambient dimension $n=1$:

Furthermore, we connect the centers of the adjacent rods using an extra set of rods (and hinges) that form a new, Hodge-dual, complex $K^{\star}$. 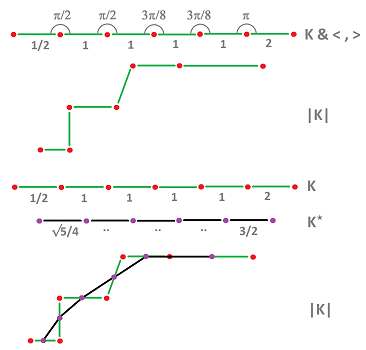 Given now a cell complex $K$ of arbitrary dimension, the first step in the construction its dual $K^\star$ is to choose the ambient dimension $n$. The rule remains the same:

For the illustrations below, we will assume that each primal and its dual cell are directly “linked” in the realization, as follows:

The result is a “staggered” grid of tile-like cells. It is simple for ${\mathbb R}^2$, as well as for any rectangular grid:

Other decompositions of the plane produce more complex patterns of duality: 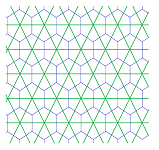 For the $2$-cells, their duals are their centers, the $0$-cells. We see how these squares shrink to become the dots.

Meanwhile, the $0$-cells are blown into the squares. Finally, the duality makes every $1$-cell turn around its center.

It is easy to illustrate the Hodge duality in Excel: one simply re-sizes the rows and columns in order to make the narrow cells wide and the wide cells narrow: 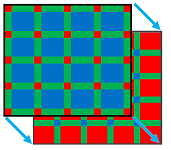 That's how you could build the dual of the whole-plane complex -- following this one-to-one correspondence. Furthermore, you can rebuild the primal complex from the dual following the same procedure. Below, we show a primal grid, the dual grid, and then the two overlapping each other: 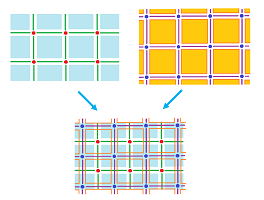 What happens if we have a finite cubical complex $K$ in ${\bf R}^2$? Just as in dimension $1$, some boundary cells are missing in the dual complex, as the example shows:

Exercise. Express the dual cell of a cube $Q$ in terms of its primal via the orthogonal complement construction.

Example (molecule). To illustrate the idea of duality in dimension $3$, one may consider the two ways a chemist would construct a model of a molecule:

The two equally valid ways are:

Exercise. Describe the cells in the above example.

Exercise. Two polyhedra are called dual if the number of faces of one is equal to the number of vertices of the other (and vice versa). Find the dual polyhedra of Platonic solids and explain the relation to the Hodge duality:

This is what the Hodge duality looks like in the case of a general $2$-dimensional cell complex. The dual cell is still placed -- for the sake of illustration -- at the center of mass of the primal cell:

We summarize the new concept as follows.

Definition. Suppose an ambient dimension $n$ is given. Two cell complexes $K$ and $K^\star$ with $\dim K \le n,\dim K^\star \le n$ are called Hodge-dual of each other if there is a one-to-one correspondence between their cells of complementary dimensions: $$K \ni a \longleftrightarrow a^\star \in K^\star,$$ $$\dim a^\star+\dim a = n.$$

We have already seen geometric complexes of ambient dimension $n=1$ as cell complexes equipped with a geometric structure: the metric tensor of $K$ and $K^\star$. This data allows one to compute the lengths and the curvatures of curves. The Hodge star operator was then built from this data.

In this subsection, we present the necessary geometric data for the case of arbitrary dimension.

Instead of trying to derive these quantities from the metric tensor, we simply list them as a part of the definition of a geometric complex. In the abstract, we simply have a pair of positive numbers $|b|,|b^\star|$ assigned to each cell $b\in K$.

For $R={\bf R}$, the definition matches the one for the case of $n=1$ considered previously if we limit ourselves to positive volumes.

In general, we don't assume that $|AB|,|BC|,|CA|$ determine $|ABC|$. Even though the three sides of a triangle determine the triangle and, therefore, its area, this only works under a particular choice of geometry, such as Euclidean. We take the opposite approach and let the lengths and areas determine the geometry.

Exercise. Give a geometric complex representation of a triangulation of the sphere, realized as the unit sphere in ${\bf R}^3$.

In addition to the volumes, the angles between every pair of dual cells will be taken into account in the new representation of the geometry.

We don't need to specify the meaning of the angle between every choice of a primary $k$-cell and its dual $(n-k)$-cell, for all $k$. For our purposes, it suffices to consider the case $k=1$. We are then in a familiar situation because the angle $\alpha$ between $1$- and $(n-1)$-dimensional subspaces of an $n$-dimensional inner product space is always understood as the angle between the direction vector of the former and the normal vector of the latter.

The last assumption explains why angles did not have to come into play in the case of a $1$-dimensional complex.

For cells in the higher dimensional case, we are looking at the angle between $a$ and the normal $b^\perp$ of $b=a^\star$, illustrated for dimension $n=2$:

Dually, this angle can also be understood as the angle between the normal $c=a^\perp$ of $a$ and $a^\star$, illustrated for dimension $n=3$:

The area of this parallelogram does not depend on how $a$ and $a^\star$ are attached to each other (they aren't) but only on the angle between them.

The way we handle angles is, of course, via the inner product: $\langle a,b \rangle \in R$ is defined for these three cases:

Exercise. Provide a structure of a geometric complex for a hollow cube.

Exercise. Suppose $K$ is a geometric complex. Show how the set of its vertices $K^0$ becomes a metric space.

It follows from the definition that, in addition to the two volume functions of these complexes, we can also derive the angle function: $$(a,a^\star)\mapsto \cos\widehat{a a^\star}=\frac{\langle a,a^\star \rangle }{|a||a^\star|}.$$ The function is well-defined whenever the expression in the right-hand belongs to our ring $R$. This is always the case when $R$ is a field or $|a|=|a^\star|=1$.

In other words, all dual pairs are orthogonal: $$\cos\widehat{a a^\star}=\pm 1.$$ The case of $n=1$ previously considered is rectangular.

Definition. We will say that the complex $K$ has the standard geometry if it is rectangular and also fully normalized: $$|a|=1 \ \text{ for all cells } a\in K\sqcup K^\star.$$

We always assume that ${\mathbb R}^n$ has the standard geometry.

We continue to take the concepts we have considered previously for the case of dimension $1$ and define them for the general case of dimension $n$. We define an operator from primal to dual chains that incorporate the geometry of the complex. Its formula is based on the analysis above.

The expression can be understood as: the total flux of $a$ across a region of area $1$ on $a^\star$.

The following statements are easy to prove.

Theorem. The two star operators are the inverses of each other, up to a sign: $$\star\star=\pm\operatorname{Id}.$$

Proposition. The Hodge star operator is always well-defined when

Exercise. Provide the Hodge star operator for the geometric complex representation of a triangulation of the sphere realized as the unit sphere in ${\bf R}^3$.

Exercise. Provide the Hodge star operator for the metric tensors presented in this and the last sections.

Next, what happens to the forms under Hodge duality? 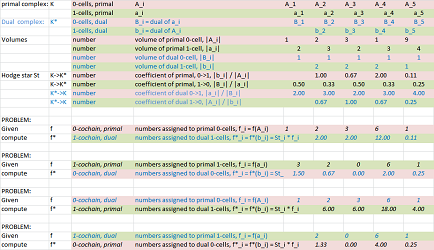 Let's review what we know about the derivatives.

Given a function $f$, we know that $ddf=0$. Therefore, the “second exterior derivative” is always trivial. Instead, one can define the “Hodge-dualized” second derivative computed following these four steps:

Thus, given two values assigned to two adjacent cells, one assigns their difference to the cell in-between, illustrated below with Excel:

We recognize $f' '$ as the result of going around the leftmost square starting from the top left.

But what about higher order forms? For example, what is the second derivative of $\varphi \in C^n$? We can still consider $\star d \star d \varphi$ but, as we follow the square on the right, the value is zero!

However, this time there is another square adjacent to $C^n$. Then, we can, alternatively, first take the Hodge dual, then the exterior derivative, and continue around the left square. The result is another “Hodge-dualized” second derivative.

Proposition. The Laplace operator is a cochain map on $K$.

Exercise. (a) Prove the proposition. (b) Is the Laplace operator generated by a cell map?