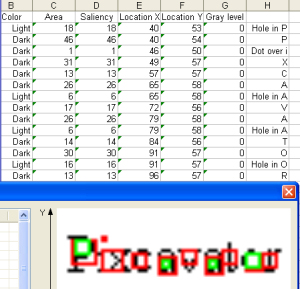 This is an illustration of how our algorithm in general and Pixcavator in particular can be used for advanced image analysis, such as OCR (optical character recognition).

The letters are captured as objects. Then the combination of the location of center of mass of the letter with respect to the line, its size, and its topology allows you to identify the letter, in this idealized situation.

The data analysis - turning these numbers into letters - would still be a challenge...