Here, we revisit the following issue:

How does a continuous functions change the topology of the space?

A narrower version of this question is:

How is the homology affected by maps?

Below, we will see how the theory of simplicial maps and their homology is extended to general cell complexes.

Example (inclusion). As a quick example, consider the inclusion $f$ of the circle into the disk as its boundary:

The outline of the homology theory we've learned so far is this. The homology is constructed as follows:

Now, if we add maps to this, the procedure is:

We would like to map cell complexes to each other in a manner that lends itself to homological analysis outlined above.

The result is used as a template to define cell maps. The difference is that, first, if $f(s)$ is attached to itself along its boundary but $s$ isn't, cloning doesn't produce a homeomorphism -- unless it is seen as limited to the interior $\dot{s}$ of $s$. The construction is illustrated for dimension $1$ below: 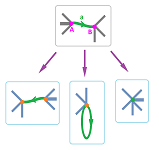 The illustration of this construction for dimension $2$ also shows that, different from the simplicial case, a collapsed cell may be stretched over several lower dimensional cells: 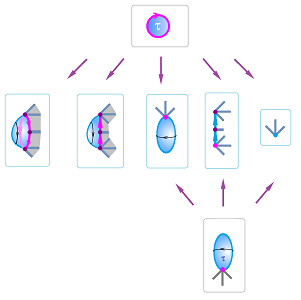 Exercise. List all possible ways complex $K=\{A,a,\alpha\}$ can be mapped to another cell complex.

Example. This projection of a triangle on a line segment is not a cell map:

Exercise. Choose a different cell complex to represent $Y$ above in such a way that the projection is then a cell map. How about the rotation of a circle through $\sqrt{2}\pi$?

Example (projection). Let's consider the projection of the cylinder on the circle: 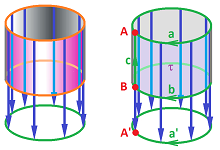 Note: the continuity requirement in the definition is crucial. Otherwise, one could, for example, cut the torus into a cylinder, twist it, and then glue it into the Klein bottle while preserving all cells intact.

The next step after defining a cell map is to construct a function that records what happens to the cells.

We will try to find several possible functions $g$ under the following condition:

The condition corresponds to the clone/collapse condition for a cell map $f$.

We make up a few examples.

To ensure the cells of all dimensions remain attached after $g$ is applied, we require:

(B) $g$ takes boundary to boundary.

Exercise. Verify this condition for the examples above.

In each of these examples, an idea of a map $f$ of the circle/square was present first, then $f$ was realized as a chain map $g$.

Let's make sure that this idea makes sense by reversing this construction. This time, we suppose instead that we already have a chain map $$g : C(K) \to C(L),$$ what is a possible “realization” of $g$: $$f=|g| : |K| \to |L|?$$ The idea is simple: if we know where each vertex goes under $f$, we can construct the rest of $f$ using linearity, i.e., interpolation.

If the first two identities is all we know, we can still build a continuous function $f : |K| \to |L|$ such that $f_{\Delta} = g$. The third identity will be taken care of because of condition (B).

Of course, this repeats exactly the construction of the geometric realization of a simplicial map. There is no difference as long as we stay within dimension $1$, as in all the examples above. For dimensions above $1$, we can think by analogy.

Exercise. Is this map well-defined? Hint: the construction for simplicial maps is based on barycentric coordinates.

Before we proceed to build the homology theory of maps, we review the setup of arbitrary ring of coefficients $R$.

modules are vector spaces over rings.

The following definitions and results can be found in standard literature such as Algebra by Hungerford (chapter IV).

The scalar multiplication can be written on the left or right.

The rest of the definitions are virtually identical to the ones for vector spaces.

A bijective module homomorphism is an (module) isomorphism, and the two modules are called isomorphic.

Exercise. Prove that this is a category.

The kernel of a module homomorphism $f : M \to N$ is the submodule of $M$ consisting of all elements that are taken to zero by $f$. The isomorphism theorems of group theory are still valid.

A module $M$ is called finitely generated if there exist finitely many elements $v_1,v_2,...,v_n \in M$ such that every element of $M$ is a linear combination of these elements (with coefficients in $R$).

A module $M$ is called free if it has a basis. This condition is equivalent to this: $M$ is isomorphic to a direct sum of copies of the ring $R$. Every submodule $L$ of such a module is a summand: $$M=L\oplus N,$$ for some other submodule $N$.

Of course, ${\bf Z}^n$ is free and finitely generated. It is our primary interest as it has appeared as chain groups. It behaves very similarly to ${\bf R}^n$ and the main differences lie in these two areas.

We will refer to finitely generated free modules as simply modules.

The topological setup above is now translated into algebra. From a cell map, we construct maps on the chain groups of the two cell complexes.

Note: The notion of orientation was fully developed for both simplicial and cubical complexes. For the general case of cell complexes, we just point out that for dimensions $0$ and $1$ the notion applies without change, while in dimension $2$ the orientation of a cell is simply the direction of a trip around its boundary. Also, we can avoid dealing with the issue of orientation by resigning, with a certain penalty, to the algebra over $R={\bf Z}_2$.

Example (projection). Let consider the projection of the cylinder on the circle again:

From the images of the cells under $f$ listed above, we conclude:

Now we need to compute the operators:

From the values of the operators on the basis elements, we conclude:

Recall also that a chain map as a combination of maps between chain complexes, in addition, has to take boundary to boundary, or, more precisely, has to commute with the boundary operator.

Note: a broader definition of cell map is used as well: $f(K^n)\subset L^n$. It can be proven that the two definitions are equivalent, up to homotopy.

For a cell map, we have defined -- by topological means -- its chain maps as the homomorphisms between the chain groups of the complexes. At this point, we can ignore the origin of these new maps and proceed to homology in a purely algebraic manner. Fortunately, this part was fully developed for simplicial complexes and maps and, being algebraic, the development is identical for cell complexes. A quick review follows.

Exercise. For the chain complexes $M,N$ above, suggest three examples of chain maps $g:N\to N$ and compute their homology maps. Make sure that all of them are different from the homology map above. Hint: make no references to cell maps.

What happens to homology classes under continuous functions?

Let's consider a few examples with some typical maps that exhibit common behavior.

We start with maps of the circle to itself. Such a map can be thought of as a circular rope, $X$, being fitted into a circular groove, $Y$. You can carefully transport the rope to the groove without disturbing its shape to get the identity map, or you can compress it into a tight knot to get the constant map etc.:

To have a cell map representation for these maps, we use the following cell complexes of the circles:

Example (turn). You can also turn (or rotate) the rope before placing it into the groove. The resulting map is very similar to the identity regardless of the degree of the turn. Indeed, then we have: $$f_*(a) = a'.$$ Even though the map is simple and its homology interpretation is clear, this isn't a cell map!

We choose one longitude $L$ (in red) and then move every point of the torus to its nearest point on $L$.

Example (inversion). And here's turning the torus inside out: 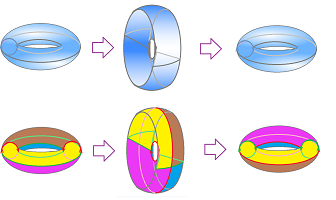 Exercise. Consider the following self-maps of the torus ${\bf T}^2$:

For each of those, 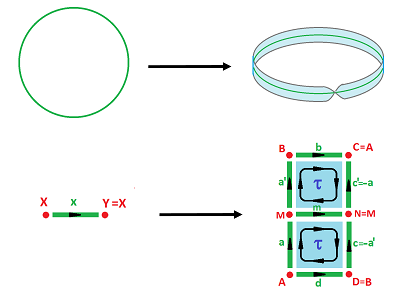 Second, we map the circle to the edge of the band: 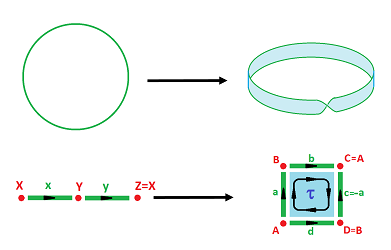 Exercise. Provide details of the homology computations in the last example.

Exercise. Consider a few possible maps for each of these and compute their homology maps:

Let's review how the theory is built one more time:

We recognize each of these three settings as categories:

First, the topological step. It relies on these familiar theorems.

Next the algebraic step.

The following is obvious.

The main result is below.

The theorems prove that the effect of either of these two steps:

is that objects are mapped to objects and morphisms to morphisms -- in such a way that the compositions are preserved. Of course, the combination of these two steps has the same effect.

The results in the last subsection have a far-reaching generalization.

A slightly more complex is a forgetful functor: it is a functor that strips all structure off a given category and leaves us with the category of sets. For example, for groups we have: $${\mathscr F}((G,*))=G.$$

Exercise. Prove that the composition of two functors is a functor.

Back to homology. Above, we proved the following:

Theorem. Homology is a functor from cell complexes and maps to abelian groups and homomorphisms.

Exercise. Explain in what sense a chain complex is a functor.

This is how purely “functorial” aspects of homology theory are applied.

Example (extension). Suppose we would like to answer the following question:

We recast this question as an example of the Extension Problem: 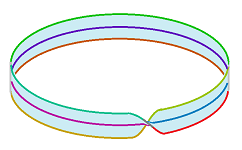 Exercise. List possible maps for each of these based on the possible homology maps:

We have been using tools for building new topological spaces from old. The main ones are the product and the quotient. Both come with a way to construct appropriate new maps. Let's review.

Example. Suppose $X,Y$ both are the circle. Then the product of the identity and a constant map collapses the torus on the equator: 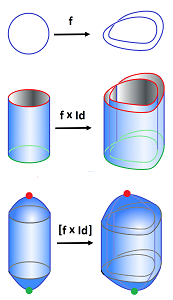 Suppose the equivalence relation collapses the top and the bottom edges of the cylinder, separately. Then $[f\times \operatorname{Id}]$ is the “double wrap” of the resulting sphere.

Unless both of the spaces are non-trivial, the product won't create any new topological features; indeed: $${\bf I}\times X \simeq X .$$ The flip side is that we can use products to create new building blocks from old, such as cubes: $${\bf I}\times Q^n = Q^{n+1} .$$ The simplicial analog of this construction is the cone which is simply adding an extra vertex to the simplex: $$\operatorname{C}\sigma^n=\sigma^{n+1} .$$ Both increase the dimension by $1$!

However, two of such cones glued together will produce the sphere!

This is how. First form the product ${\bf I} \times X.$ Nothing new here. Then create the quotient by collapsing the top to a point and the bottom to a point. 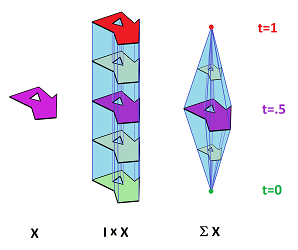 Without the second part, this is the cone of $X$. 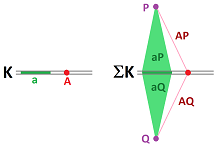 The idea is to use suspension to create new spaces with new, higher dimensional, topological features. However, these features don't come from nowhere; compare:

For the spheres, things are simple:

Exercise. Prove the theorem for simplicial complexes. Hint: Write the two chain complexes and suggest a kind of chain map between them that raises the dimension. 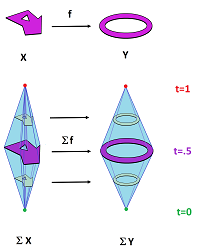 Exercise. Prove that the suspension map is well-defined.

Exercise. Prove that $\Sigma$ is a functor from the category of topological spaces into itself.