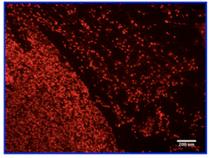 From the paper: "Prevention and early detection of breast cancer are the major prophylactic measures taken to reduce the breast cancer related mortality and morbidity. Clinical management of breast cancer largely relies on the efficacy of the breast-conserving surgeries and the subsequent radiation therapy. A key problem that limits the success of these surgeries is the lack of accurate, real-time knowledge about the positive tumor margins in the surgically excised tumors in the operating room."

"The watershed transformation considers the gradient magnitude of an image as a topographic surface. Pixels having the highest gradient magnitude intensities correspond to watershed lines, which represent the region boundaries. Water placed on any pixel enclosed by a common watershed line flows downhill to a common local intensity minimum. Pixels draining to a common minimum form a catch basin, which represents a segment. In this case, this approach is expected to segment the nuclear fluorescence images and extract the statistics such as nuclear size and count. We used a custom-plugin written in the popular ImageJ (NIH) program for the watershed analysis of the images (http://rsbweb.nih.gov/ij/). We further tested another equivalent approach for achieving automated nuclear statistics based on the topology of the digital images by the CellAnalyst software program (http://www.assaysoft.com) [24–28]. In this approach, an image pixel is defined to have four vertices (corners), four edges, and one face. Algebraic topology uses algebraic operations with these objects to capture and count the number of completed cycles––circular sequences of edges. The completion of a cycle indicates the presence of a cell (or nuclei in our case). The topological nature of the algorithm makes it especially suitable for nuclear counting since (a) the count of nuclei is independent of their locations, (b) the measurements of nuclei are independent of their orientations with respect to the image grid, and (c) the nuclei and other features are captured with no deformation, smoothing, blurring, or approximation."

See other examples of image analysis.