Start with Overview and Topological Features of Images.

The methods described below are implemented in ImageJ and other image analysis software.

Information is lost when one chooses a single threshold to binarize a gray scale image (see Thresholding), which is a common way of image segmentation. Even though the thresholds can be chosen based on the shape of the gray scale histogram and other information to make it best, sometimes no single choice of a threshold will reveal all the features. This is the case when one part of the picture is significantly darker than another, as is common in fingerprinting, below. A simpler but just as specific example is a black object on gray background next to a gray object on white background, right. No matter what threshold is chosen, there is only one object visible. A similar example with 255 objects of different levels of gray on lighter backgrounds would show that any method based on merging gray levels will fail to distinguish all of these objects. 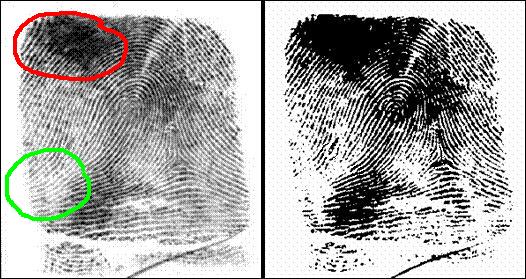 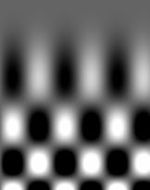 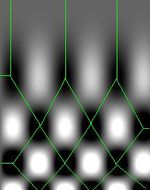 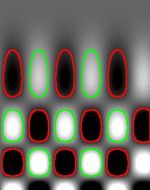 An example of the output of Pixcavator. 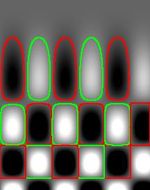 Another example of the output of Pixcavator.

Pixcavator's image analysis method may appear similar to the watershed algorithm. It is true only in the sense that both look for minima and maxima of the gray scale function. The difference comes from the main idea of topology which is that there are objects and holes in them, and there is nothing else. In case of gray scale, this means that there are dark objects on light background with light holes in them, or vice versa.

Analysis of topology of gray scale images with trees

The papers below take some similar approaches to the problem. Interestingly, these authors appear to be unaware of each other.

The differences are quite important.

The results of image simplification are very similar though. For more see Graph representation of images.

Computation of homology of binary images

There have been a few attempts to address homology computation in imaging in the academic literature, and the treatment tends to be cursory at best [19], [21]. More recent studies [27], [18] provide a number of useful algorithms for homology. In the context of digital topology, the issue is addressed in references [16] and [22].

Existing software designed to compute Betti numbers and other topological characteristics tend to be academic computer programs which lack a user friendly interface.

Of these, only CHomP is applicable to digital images. None of these methods and programs is applicable to gray scale or color images or video sequences. Existing software tools that use topology are currently difficult to use and narrowly applicable.

A topological approach to image analysis was taken by Djemel Ziou, Marie-Flavie Auclair-Fortier, and Madjid Allili in their US Patent Application No. 20050232511 “Image model based on n-pixels and defined in algebraic topology, and applications thereof” [2] and several publications. The methods are quite advanced and goals are far-reaching. One can only hope that this approach will have a wiki like ours one day.

Here we need a list of techniques, though unrelated to our methods or even goals, that however use same or related words. This may lead to confusion. These words may be the following.

It could mean different things to different people [3].

It could have nothing to do with image analysis [4]. If you have a shape that changes, with time or otherwise, it is convenient to represent these shapes as level sets of a single function. This seems especially useful in modeling because it is much easier to parametrize a single function. In image analysis we are in the exact opposite situation. We already have a single function - the gray level. Now what we do is take its level sets (or sub-level, does not matter in this context) and analyze them as binary images/shapes/regions. In fact, one can think of them as a single shape that changes with time. We've made a full circle...

Discussion of some literature

Image segmentation is the extraction of objects from an image. A common technique finds the boundaries of the objects -- edge search. In the case of a gray scale image, the edges are found by locating the areas where the rate of change from black to white is high. In order to do this, a threshold level has to be set, which means that loss of information has taken place as some edges may have been lost. Without an unbroken boundary, it is impossible to reconstruct the objects in order to conduct further analysis.

By trying to represent objects by means of their boundaries, current image analysis methods tend to segment gray scale images by finding the level curves of the gray scale. Examples of such methods are Contour Trees [7], connected operators [24], and Digital Morse Theory [10]. In our view, objects are sub-level sets and their boundaries are level curves, with the former more robust with respect to noise. Indeed a loss of a single pixel may result in a broken boundary. Also, these methods don’t apply to color images.

With respect to image enhancement of 3D images, the reduction of “noise” is generally accomplished by the removal of objects and voids. An example is the method of connected operators [24]. However, cutting the spurious little tunnels found when mapping the brain is a challenge, because a tunnel does not correspond to any object or void. An approach has been suggested [2], [3] in which the components of the complement of the object in its convex hull are used to represent its tunnels. However, this representation fails in more complex settings such as porous material. The representation of tunnels in 3D will remain confused without homology theory.

Even when the 1st Betti number is computed, the topological features often are not represented explicitly. This means that the size and location of tunnels cannot be determined, and noise can be confused with features. One example is the so-called Digital Morse Theory [10].

Commonly all procedures are global. This means that if only part of an image has been degraded, then the results of many procedures, such as Fourier transform, may be dramatically different. In the proposed approach, the change of a part of the image will not generally affect the processing of the other parts.

Current methods often use floating point arithmetic, which takes more memory, results in slower computations, and introduces round-up errors. The significance of these errors, as well as errors resulting from the approximations and discretization of continuous methods, is often ignored. These errors may produce fatal instabilities, especially in an iteration procedure such as in the active contours method. Proof that these errors will not affect the outcome is absent or valid only under restrictive conditions.