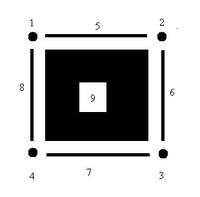 Adding a stand-alone pixel requires 9 steps: adding 4 vertices, 4 edges, and the cell itself.

The image is built pixel by pixel. As it happens, the changes in topology are being tracked. The steps and the changing topology are recorded in a graph, the topology graph.

Based on the cell decomposition of images vertices and edges are also added. Generally, adding a new vertex creates a new component and a new node in the graph. Adding a new edge either connects two components or creates a hole in an existing component. Adding the cell itself eliminates a 1-cycle.


Now, let's consider the step of adding a single pixel to a black image. The pixel consists of 9 parts numbered as follows:

They are added in this order illustrated below.

A graph representation of the 4 stages (9 steps) of adding a stand-alone pixel.

Since two vertices and one edge are already present, adding a second pixel requires only 6 steps: adding 2 vertices, 3 edges, and the cell itself.

A graph representation of the 6 steps of adding a second pixel.

If we omit the intermediate steps of adding edges and vertices, the graph looks much simpler. Here is an example: 8 pixels arranged in a square. The pixels, 1-8, are added one by one. After the first one there are no new cycles until pixel 7 which creates a new 1-cycle. 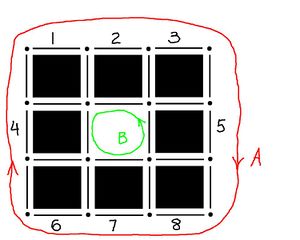 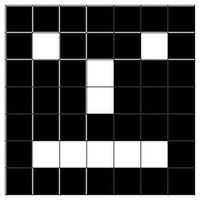 Exercise. Plot the graph for this image (Gridface). Answer